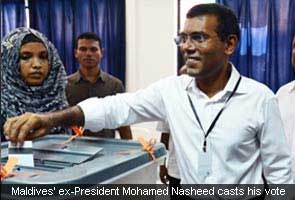 Mohammed Nasheed won the first round of presidential election.

New Delhi: In the strongest public sign of its displeasure, India has given a thumbs-down to the indefinite postponement of the final round of Maldives' presidential elections. The court halted the elections, scheduled for Saturday, after allegations of irregularities in the first round by Qasim Abrahim, who was placed third after Round 1.