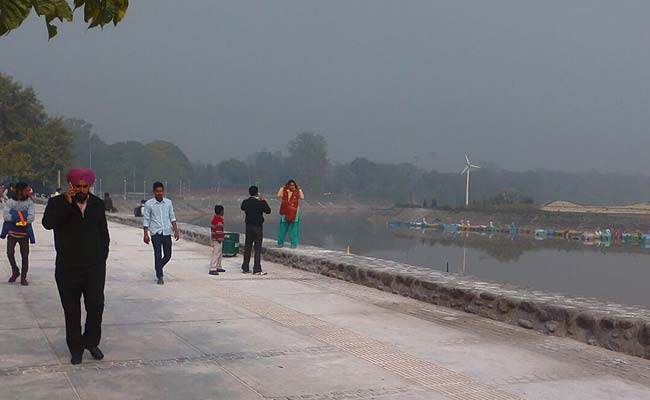 While the joggers track, cafe and restaurant around Sukhna Lake have been opened, the lake itself is still out of bounds.

Chandigarh: Sukhna Lake, regarded as the 'lifeline' of the city of Chandigarh, has been thrown open to visitors after a month. The tourist spot was shut in the wake of the avian flu threat, that came to light after a sample of dead goose tested positive for the deadly virus on December 16.

The Union Territory advisor, Vijay Kumar Dev, declared the lake area open with handful of morning walkers and officials who braved the dense fog and chilly morning. The jogger's track along the lake, cafeteria, restaurant and other recreational facilities have been thrown open.

But the lake would remain out of bounds till March. No boating or any other water sport would be possible since the migratory birds stay in the lake area during winters, and the threat of bird flu remains.

The Chandigarh administration has put sign boards asking the visitors not to go close to the lake, and the stairs leading to the water have been barricaded. Also, the administration has installed hoardings at the entry and exit points informing the public about safety measures.

Due to the bird flu scare the 100-odd geese reared in the lake sanctuary had to be culled and have been buried on the island of the lake itself. The administration has also carried out a door-to door survey of the households with a three-kilometer radius of the sanctuary, to check for symptoms of flu.

Promoted
Listen to the latest songs, only on JioSaavn.com
From now on, geese will not be reared, as a precautionary measure. The Chandigarh Industrial and Tourism Development Corporation (CITCO) is now working on a series of events to bring Sukhna back to life.