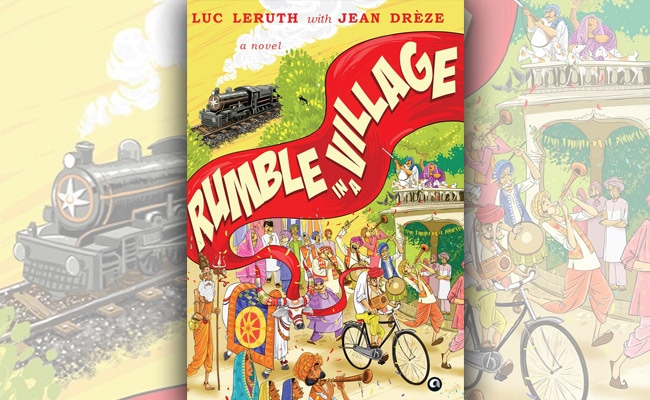 The cover of 'Rumble in a Village'

I was at home, quietly resting on my charpoy when Babu stormed inside, 'Anil sahib, come with me, quick!'

By the time I came out, Babu had already disappeared but I joined several others who were running towards the Seed Store. Something uncommon was clearly going on. Then we all heard the horn of a vehicle in the distance. People stopped running and gathered around Rampal Singh's house. We did not have to wait long. Rampal's own dunlop emerged from around the corner, with Phool Singh standing on it and whipping the bullocks as hard as he could. He was followed by a tractor - the first that Palanpur had ever seen - and the driver, a Murao called Ganga Sahai, was blowing the horn.

For a minute, I thought that the arrival of the first train in the nineteenth century must have created a similar commotion. Of course, there was no zamindar in the crowd this time, but there was a headman and he was not looking very chiefly. Rampal's mouth was open and his bidi had fallen from his lips. His eyes were fixed on the unfolding drama. The whole village witnessed his humiliation: no matter how hard he pushed the bullocks, his brother Phool Singh was unable to remain ahead of the tractor. He was overtaken as they approached the Seed Store. Then, the tractor slowed down and crossed the Thakur area. It is not that Ganga Sahai was trying to show off, but there was no other route: the other approach to the Murao quarters was not wide enough for a tractor. And so it happened that Ganga Sahai, grandson of a poor Murao farmer who had struggled to make ends meet as a sharecropper of the zamindar, drove a tractor right past the homes and bullock-carts of the Thakurs. The writing was on the wall, and the affront would be hard to forget.

The tractor was not exactly brand-new, or the latest model. It was old and battered, but it was still a tractor. Ganga Sahai had competently stirred his ship over the years. He had no brothers, and nor had his father. Thus, by the accident of demography, he had inherited his grandfather's entire estate: a full eighty bighas of fertile land. He could have lived an easy life off his property, but instead, like most Muraos, Ganga Sahai immersed himself in farming, spent with moderation and invested his savings wisely. With the cash of his early sugarcane crops, he bought healthy cows and she - buffaloes and fed them well. In the winter, he augmented his earnings by making gur from a kolu. He was often the first to acquire new farm technology: a pumping set, a thresher or flour mill, and now - a tractor.

Not all of Ganga Sahai's vast land was cultivable. The fallow patches were strewn with large stones and tree stumps that no-one had ever been able to remove. Ganga Sahai went straight to his house, dropped off a few boxes and went on to his field. Obviously, he intended to make the best possible use of his investment. A few Thakurs had followed Ganga Sahai, hoping to witness his venture failing. It did not. Within an hour, the largest obstacles had been removed and the Murao was still working. He would clearly continue for a few more hours. I left, soon followed by Rampal, 'You see, Anil sahib, this is what happens when people try to rise above their station.'

'As headman, you should be happy,' I objected. 'This will improve living conditions in the village. Like the train in the old days.'

'It will bring wealth to Ganga Sahai, but the rest of us will suffer. These people do not respect anything.'

Excerpted with permission of Aleph Book Company from 'Rumble in a Village' by Luc Leruth with Jean Dreze. Pre-order your copy here.

Rumble in a VillageJean Dreze