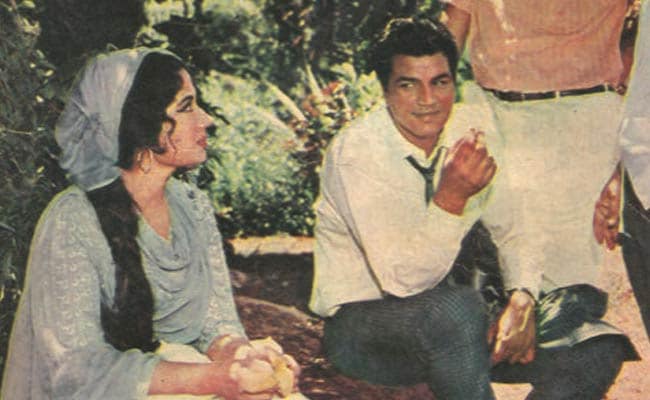 Dharmendra with Meena Kumari on the sets of Purnima (Credit: SMM Ausaja Archives)

The first unfortunate involvement that happened in Dharmendra's life was that with Meena Kumari.

Most of the industry believes-and perhaps, rightly so-that it was the star-crossed actress, bereft of enough love and affection in real life, who took a fancy to the strapping young man she had come to know since the time they began shooting for Purnima. This film was followed rapidly by Main Bhi Ladki Hoon (which was released first), Kaajal (not opposite each other) and Phool Aur Patthar, with which Dharmendra, on a quick ascent, zoomed into the top echelons. Three more films followed - Chandan Ka Palna, Majhli Didi and Baharon Ki Manzil, but all of those bombed.

As mentioned, it was Purnima that was launched first, and like with so many top heroines whom he worked with for the first time, the new young actor asked a friend, 'What is she like?' Meena Kumari's biographer states that Dharmendra was 'petrified at the prospect of facing her in front of the camera.'

The actor was quite intimidated by the man's reply that she could outclass him with a mere glance, a twitch of the lips or a 'dialogue'. The friend advised him to touch her feet when they first met.

As a result, the biography goes on, Dharmendra approached her with the utmost respect, humility and willingness to learn. The young actor had claimed to be her ardent fan and worshipper. He would watch her movies and dream that if he became an actor he would do a film with her.

When they were introduced at Chandivali Studios, Dharmendra was 'thrilled, happy and gratified' that she was warm, friendly and encouraging towards him. The touching her feet part has no confirmation, but the book insists that she did say, 'The boy will rise. He is not a routine entry.' 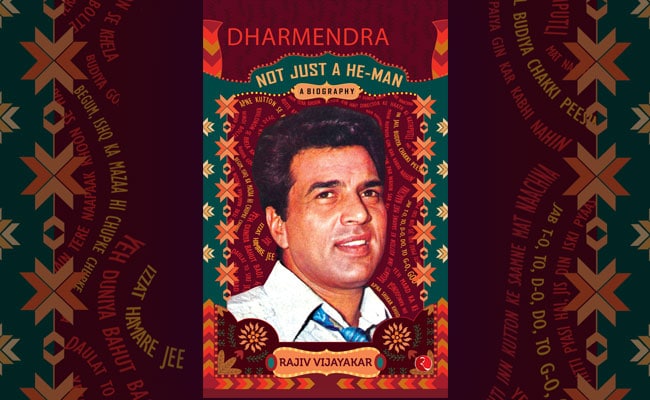 Cover of Rajiv M. Vijayakar's book Dharmendra: A Biography, Not Just A He-Man

And that's when we come to the relevant part: At that point in time she needed a stable and devoted man to care for her. And young Dharmendra was the right man in the right place at the right time.

We would rather not, thus, give credence to the theory that Dharmendra used Kumari to move up the starry ladder and then discarded her. Let us examine things step by step: Firstly, none of their films, but for Main Bhi Ladki Hoon produced by AVM Productions, was a big film-maker's project. O.P. Ralhan (Phool Aur Patthar) had given hits but was no mighty film-maker. Hrishikesh Mukherjee, who directed Majhli Didi, arguably the pair's biggest flop, was no one to take casting suggestions from any star, senior (like Meena Kumari) or junior (like Dharmendra).

Dharmendra, as we have seen, had a very promising box-office track record (best described as 'upwardly mobile' in contemporary lexicon) that had already given him an edge over contemporaries and some seniors, so we must say that the idea that Dharmendra used Meena Kumari for career advancement does not hold water. As for their coincidental biggest hit together, Phool Aur Patthar, it was Dharmendra's work and physique (strictly in that order) that zoomed his status way up when the film was loved. Meena Kumari's star position, at worst, was unaffected, and at best, it helped her get her last few films as a leading lady before shifting to character roles in 1968.

An anonymous source has stated that initially the relationship was only about work, but with an extra contribution from Kumari's side. She would instill confidence in Dharmendra by correcting him, making him practice his shots, explaining things so that he could understand his work better and overcome his weaknesses - and all this especially in her spare time, even for films in which she was not his heroine.

It is said that by 'grooming and correcting weak points,' the actress, deprived of love, wanted to engage his attention, as she was too much of a reputed name to make a pass openly. This way, she would get to spend time with him, without making her real intentions known to anyone, including him. Almost a daily visitor at her house at Juhu's Janki Kutir, they would open a bottle and spend hours together.

But, contrary to popular perception, Dharmendra managed to restrict her alcohol consumption when he was there with her. He was everything she needed and wanted - loving, honest and caringly reliable. But when he would leave, she would go berserk with the bottle.

Excerpted from Dharmendra: A Biography, Not Just A He-Man by Rajiv M. Vijayakar with permission from Rupa Publications India. Order your copy here.