You And I, We're Both Responsible For This Photo

A few months ago, I was invited to be a judge at the Nature in Focus Wildlife Festival held in Bengaluru. Along with other judges, we chose a powerful, evocative photograph of a mother and baby elephant crossing a road with fires under their feet. A mob can be seen beyond them. It's a searing picture of the Human-Elephant encounter gone wrong and captured at its most heart-rending moment. The fear and pain on the faces of the elephants, especially the calf, is heartbreaking. 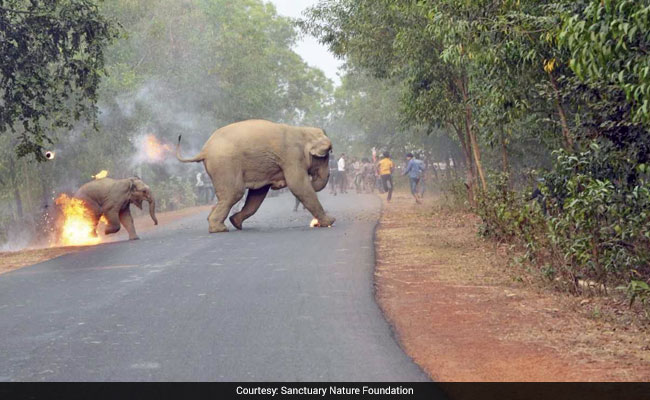 The award-winning photograph "Hell is Here" by Biplab Hazra

This picture has now won Best Wildlife Photograph Award at the Sanctuary Nature Foundation Photography Fest. International media, from Fox News, to The Independent and The Guardian have carried articles about it.

Of course, we react emotionally to this photograph. But there is a bigger picture beyond this photo and the interpretations in the international media; the picture it forms for people around the world is in my mind not the whole truth.

Every day in India, somewhere in Assam, West Bengal, Tamil Nadu, Odisha and Karnataka, humans and wild elephants come face-to-face. India has the largest population of Asian elephants in the world, with about 25,000-30,000 in the country. Over 70% of them don't have a viable habitat, using fields, tea and coffee estates and fragmented green patches as secondary habitats. Large animals with large appetites, each elephant needs about 150 kilos of food and about 150 liters of water per day. In many areas, herds are hungry and thirsty. In most areas, they have to run the gauntlet of mines, roads, dams, ditches, trenches, railway tracks, walls, buildings and, of course, humans. This photo is representational of this crisis. But that's not where the story ends.

Yes, there are some awful instances where elephants are killed, often brutally, but let's not forget that 100 people on average are killed a year in India by elephants. The truth is that when faced down with several animals that weigh several tons and can be pretty dangerous in a confrontation, people take drastic measures. When is the last time any of us had to be awake night after night to protect our fields, or our homes where we have stored harvested grain? That when hungry elephants come, we have nothing but fire crackers and sticks because we, unlike people in the African countries with elephants, don't own guns? Of course, some people might take it too far and throw burning branches and burning rubber and the ensuing chaos hurts elephants and people. However, we have not had to weep over the bodies of loved ones crushed beyond hope by an elephant.

For 15 years, I have travelled across India to various zones where people and elephants are in cramped shared spaces and both are trying to survive. For the most part, there is still a deep bond and understanding from the people, and the elephants are just trying to get by. A young mother with three children in Assam, homeless because elephants had knocked down their house for a second time, tells me she feels sad but does not and never will hate the elephants because it is also a being who gets hungry, also a being who needs space. She then says with great sympathy, what will they do when there are so many humans going into their space? An old couple in Tamil Nadu who has had their fields raided and their homes destroyed tell me, we worship them as Gods, we have a language between us that they understand, but we have changed the way we grow crops and the way we live and they have nowhere to go. To me none of us, not one of us living our privileged lives, will have this grace, this understanding, this love so greater than the fuzzy version we feel cocooned in our privileged worlds.

The fact is that most of the damage to elephant habitat, apart from encroachment, is the lovely tea and coffee we like to drink, the mines that dig up the earth for our use, the dams and irrigation projects that bring us water and electricity and the roads that take us places all comes at a price someone else is paying. We might not be the literal hand that lit a fire bomb and threw it at a baby elephant, but we are most certainly the action behind those hands.

The international media is going to town with this picture, but how about realizing that in developed, manicured worlds, they are lucky if they have a butterfly coming through their window, let alone an elephant. It's a complicated issue and requires long-term involved solutions. Making the people who have most to lose the villains is ridiculous and knee-jerk.

The picture is titled "Hell is here". Yes it is. We created it.