What These Fires On The Map Mean For Delhi

Some eyewitnesses spotted these flames in the first week of April. Satellites had already picked these up. Farm fires are expected to peak over the next few weeks sending air quality plummeting. In the first ten days of April, the big air pollution danger came from central India, particularly Madhya Pradesh. But the red dots in the sat pictures - the fires - are peppered across states from the north downwards.

On test are the new Yogi Adityanath and Amarinder Singh governments in UP and Punjab, as well as in Haryana. These are states where farm fires played a great role last November in Delhi's worst-ever pollution levels. But there's little detail of just how these states will help farmers avoid burning the crop stubble after the Rabi harvest in the next few weeks.

Punjab, reports say, will use satellite pictures to locate fires and, thereby, offenders. The Congress had in its manifesto promised a subsidy on zero-till seeding machines which could help cut down the need to burn residual stubble from the wheat harvest. The Haryana government did precious little last winter judging by the number of fires seen - just scroll through the sat pics here for last October.

Fires in the eastern and border areas of UP have been spotted from space since the first week of April. While the BJP manifesto in the state had little on how it plans to improve air quality in one of the most polluted parts of globe, the new agriculture minister of UP was quoted recently as saying they were considering "a blanket ban on stubble burning across the state".

Delhi and the cities around it are getting caught in the cross-fire. The AAP and surrounding BJP governments are perhaps too antagonistic towards each other to work out a solution.

Barring a miracle in either political action or natural phenomena, there is a high chance that what will happen in the next few 6-7 weeks will look like what has happened in the last two decades.

The sweep of red and deep red shows PM 2.5 pollution - consistent and almost continuous since 1998 at least. The deep red is 5x the national average and 20x the healthy limit set by the WHO. 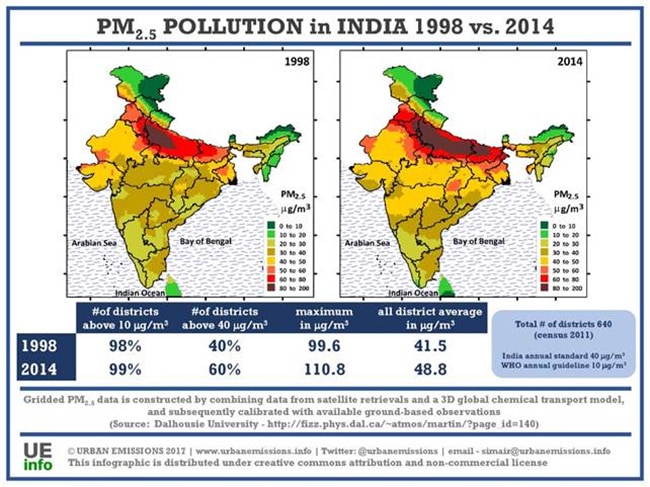 In case you're one of the roughly 400 million-plus people in the red zone, this is a site you can use to check the air you've been breathing during this time.

Of course the pollution here is not only because of farmers burning stubble. It's also because of outdated engines in vehicles, coal power plants, burning of other biomass, traditional chhulas and topography. This is why Varanasi last year was reported to be the Indian city with the most toxic air, the most number of high air pollution days.

But preventing stubble burning can have immediate, visible effects. In Delhi last November, the pollution was literally in your face. That was primarily because of a combination of such fires, coupled with Diwali crackers and low temperatures.

No Diwali, no low temperatures in April and May means the pollution is unlikely to be as obvious as last November. But make no mistake, the danger is as high. As a study on the Indian Academy of Sciences site warns, not only does such open burning contribute to an estimated 75% of the fires seen annually in India, but such fires contribute a quarter of the filth - black carbon, organic matter and carbon monoxide emissions in India.

Stopping fires is perhaps relatively easily to do - by executive action compared to policy changes on, say, coal usage or the important Jwala LPG programme. Many experts, including in government, have suggested how to help farmers and why they need aid as well as awareness that burning stubble damages the soil, their crops and their earnings.

But for all this to happen, states have to realise it's an emergency situation and take immediate action. Sadly, there's little sign of this.