Today's shooting at Jamia Millia Islamia by a man who had posted "Shaheen Bagh, game over," shows high tensions have begun to run in Delhi. The BJP's non-stop campaign against Shaheen Bagh is encouraging its supporters, and more violence could follow. It was waiting to happen. Yesterday was a precursor, a man waving a gun, today the gun went off.

Will more violence follow? And why is Shaheen Bagh so critical to the BJP?

The BJP needs Arvind Kejriwal out. In the multiple power centre that makes for Delhi's governance, the BJP controls the police, the DDA (Delhi Development Authority) and municipal corporations, but it does not rule Delhi completely.

In this fractured set up, Kejriwal is a sore thumb, and nationally a politician who worries the BJP. Kejriwal has many advantages; he is relatively young, seen as not corrupt, connects with the masses and offers a long term threat to the BJP dream of a 30-year Raj. Being Chief Minister of Delhi gives Kejriwal a voice far more compelling than most Chief Ministers as he draws national media attention easily and he knows how to use it.

Unfortunately for the BJP, it has done little for Delhi through its various power centres to trumpet as achievements. The law and order situation remains terrible, as does traffic; the three MCDs have achieved little in terms of cleanliness and by and large remain inefficient; the DDA builds unattractive housing which it is finding impossible to get rid of, even many of the famous Commonwealth Games Village apartments haven't been sold; claims of the additional 200 km of metro is a shared glory with Kejriwal, (worse, the claim that 6 million travel daily on the metro is dubious. At best, this number has been reached only a few times, as exorbitant fare hikes make the metro uneconomical to the poor).

The strange thing is that while the BJP has swept Delhi in the last two Lok Sabha elections (57% of the vote in 2019), locally they have performed poorly. The BJP seldom crosses 37 per cent in the assembly and MCD elections and hasn't won the assembly since the forgotten days of 1993 when they had 42 per cent. Added to this unpalatable broth is that the BJP has floundered in Haryana, lost Jharkhand, made a mess of its alliance in Maharashtra, and if it hadn't been for money bags in Karnataka, they would not be in power there. With the exception of Karnataka and Gujarat, they don't run a state south of UP-Bihar. 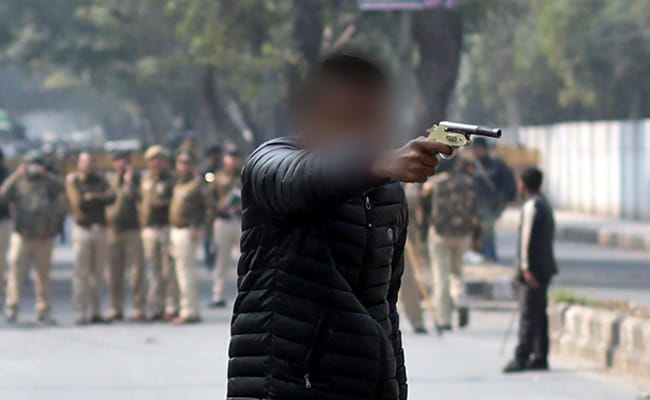 Saying that he was a juvenile, police officials said that the attacker cannot be identified

The AAP government has managed to use what little power it has and many freebies to make a difference for much of Delhi's population. Free water and electricity, mohalla clinics and improved education institutions have worked to keep high public support. Early opinion polls had AAP looking at another landslide with 60 per cent support (C Voter on January 15).

But Shaheen Bagh has given the BJP an opportunity to turn up the communal temperature in Delhi. The Shaheen Bagh protest in south-east Delhi, cutting it off from neighbouring Noida, has caused traffic chaos and after more than month of jams, taken its toll on many former sympathisers and neutrals. It is this opportunity that has been seized by Home Minister Amit Shah and his campaigners. The non-stop attack on Shaheen Bagh and the "anti-nationals" , the "traitors"and "goli maaro" campaign have made it one of the most divisive campaigns in recent times. And it seems to be working; the BJP is gaining ground. C Voter claims that the BJP support has already jumped 7% by Jan 27 to 31% in a week of this challenging campaign. But will this be enough?

To topple AAP, the BJP needs to pull them down to 40% and get themselves on level terms.

On 36 seats, AAP has a margin of more than 20 per cent which means the BJP needs to work harder. The Congress may help split the anti-BJP vote as it did in the 2017 municipal elections but given the state of the Congress, even that may not be enough. Which is why the budget offers the BJP the chance to reach out to Delhi's enormous middle class.

In 2019, the BJP used the budget effectively to roll out the PM Kisan Yogana and handed 70 million farmers a Rs 6000 bonus. Now it may be Delhi's turn. Close to 30 per cent of Delhi's 13 million voters file tax returns. Given the bureaucracy living in Delhi, the salaried class is huge and the BJP will want to target them. It will not cost the government much to cut tax rates for those under Rs 10 lakh and give more tax-free investment allowance. Many economists have already called for such measures, claiming it as their own. It would help the BJP with Delhi's middle class who have been hit with high inflation.

For the protestors at Shaheen Bagh, what do they see happening? Should they stand their ground and allow the BJP to use them as the weapon of choice against AAP? Would a BJP victory not be counter-productive for them? Would they be blamed for that? Or, with so many Shaheen Baghs across the city (and country), is it time to claim victory from the very campaign the BJP is conducting?

Arvind Kejriwal faces the same problem. He wishes that Shaheen Bagh disappeared and the election was fought on his record, in which case he would win at a canter, but there is little he can do if Shaheen Bagh holds out, except hope that his core support stays with him.

Finally, will the BJP up the ante? Will they risk clearing out Shaheen Bagh with a surgical strike? Or would that be too great a risk, of setting off communal violence in Delhi and beyond? But as today's events have clearly shown Delhi is on the edge. Perhaps time for everyone to take a step back.