I'm not only hopeful but certain that this will find you hale and hearty. I always pray for your good health and wish that your limitless energy remains intact.

The scope of this letter is very limited. It is common knowledge that social media today is fertile ground for trampling all over the decency of language. This is done not just by members of your party and your supporters but also those from the opposition. And their numbers are increasing every day.

The sad part is that you happen to follow some of these people on Twitter who use grotesque language and indiscriminately dole out threats. And you have continued to subscribe to their accounts even after their malevolence was highlighted in public and sparked controversies. That such people should be able to claim or have any affiliation to you does not behoove either you or the dignity of your office.

You must have chosen to track their accounts because of some special abilities that these people have. But I hope that the abilities to intimidate, abuse and incite communalism are not among them.

I can understand that you may be too busy to deal with this, but at least your team can ensure that you do not follow such people on Twitter. These people undermine your dignity. The people of India have showered immense love upon you; if they have fallen short anywhere, you can ask them and they will gladly give you much more. But it is not becoming for the Prime Minister of India to follow people who express grief at his critics being alive.

I have to admit that I have been a little scared since I read on AltNews that you happen to follow some of the members of a WhatsApp group called 'Om Dharmo Rakshati Rakshitah' who have been hurling the choicest abuses, making communal stabs and describing as terrorists some journalists including me, though we are proud patriots. I cannot even read out aloud some of the language used against me and other journalists. It is my duty to respect you even in the face of the shrillest of criticism, so I say this without bitterness. It is absolutely shameful, the kind of language that is used for women journalists by these groups.

It really saddens me that on social media, even you are not spared from impolite language. But I am raising for now the case of those who claim to be in your camp who threaten lone journalists like me. Whenever I've tried to distance myself from the WhatsApp group, they strike again with language like "Catch him, he's getting away, beat him". 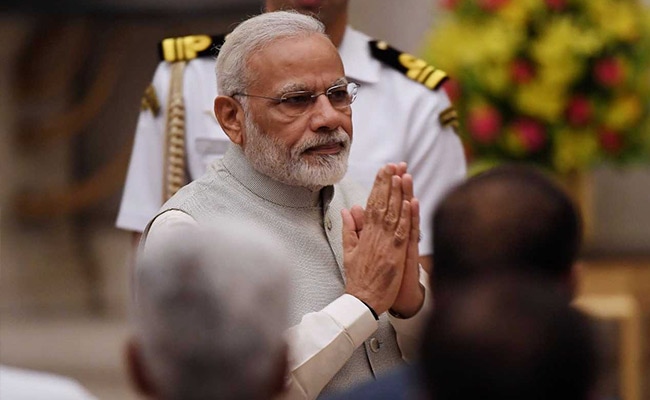 PM Modi follows some of the members of a WhatsApp called 'Om Dharmo Rakshati Rakshitah' on Twitter.

This crowd that politics has cultivated on social media and the streets will one day become a huge problem for our society, especially women. Most of this lot's preferred invective is misogynistic. They are so communal that you, who want to erase all communalism from India by 2022, would not tolerate their sentiments. But even your speech on August 15 had no effect on them and they keep abusing me.

I have a question for you. Do you really follow Niraj Dave and Nikhil Dadhich? Why? A few days ago, I shared a couple of screenshots from their WhatsApp group on my Facebook page @RavishKaPage. An investigation by Pratik Sinha and Neelesh Purohit of AltNews shows that Niraj Dave is a resident of Rajkot and is the Managing Director of an export company. You follow Niraj Dave. When I asked him not to use abusive language, he replied that he is sad that I am alive.

Much has been written about Nikhil Dadhich, the other member of the same WhatsApp group. Whatever he said about Gauri Lankesh after her death, you may not like it and I am sure you do not sanction it, but the fact is that you still happen to follow him if my information is correct. Recently, Amit Malviya, chief of the BJP's IT Cell, shared a distorted video of my speech designed for misrepresentation. Even after AltNews revealed the truth, Amit Malviya expressed no regret.

Sir, I really did not know that this Nikhil Dadhich has latched on to my phone as well. He is a member of the exceptionally communal group into which I am added by force and threatened with violence. I had never imagined that there could be any line, however dotted, between the members of this toxic assembly and you. I wish that the findings by AltNews were untrue. But Nikhil Dadhich even has photographs with your ministers.

Not only this, but some of the administrators of the 'Om Dharmo Rakshati Rakshitah' WhatsApp group have names like RSS-1 and RSS-2. One is called Akash Soni. He is seen in photographs with Defence Minister Nirmala Sitharaman, Health Minister JP Nadda, and Delhi BJP Chief Manoj Tiwari. One can, of course, feature in photographs with anybody, but this man runs a group that threatens and fans communal discord. Should that not be considered alarming by your team?

If someone writes anything about you, the administrator of the WhatsApp group is arrested - I have read several such news stories.

Is Akash Soni an official of the RSS? Along with me, he has put up the phone numbers of Abhisar Sharma, Rajdeep Sardesai and Barkha Dutt on the group, says the report by AltNews.

Leaders of the organisation chaired by you have publicised my number, earning me threats in the past as well. I was worried but I did not write to you. I am writing to you this time because I want to know if you could have this investigated: can members of this group really kill me. Is my life in danger?

I am an ordinary citizen and quite insignificant, but I am also a vigilant and committed journalist. They say any day now, at your discretion, I will find myself on the streets, out of a job. A few days ago, there was even a celebration of sorts of social media centred on the theory that I am about to lose my job. Many say the government is going for me. Recently I read a report on The Wire that the editor of Hindustan Times Bobby Ghosh was sacked because you didn't approve of him. They say it's my turn next. I laugh at these reports but I also worry. I don't like to think that the powerful Prime Minister of India can have a journalist sacked. But people say it is only a matter of days before even I am axed. Is it so, Sir?

If so, it'll be a matter of privilege for me. But you shouldn't let it happen. Not for me, but for the great democracy of India. Otherwise, people will be forced to think that if their voice is different from others, more critical than others, there is no place for them even in this large democracy. Should the job of a journalist be decided at the level of a Prime Minister and Finance Minister? I see such speculation in line with the threats that I get on that WhatsApp group. If you did not follow them, I really wouldn't have written this letter.

I have an aluminium trunk that I came to Delhi with. God has given me a lot in the last 27 years, but that trunk remains with me. I can return to Motihari with that trunk but I have my family to support. Who doesn't think about making a living? Huge stars keep doing commercials even at the age of 70 or 75 to make money. When such people seek employment to run their homes, will far lesser people like me be exempt from this concern? Surely, you wouldn't want to see my kids on the street? Would you? So much hatred for me? My kids will still pray for you and I love the streets. So even there, I will still keep asking questions. This is what Bapu had said when he visited Champaran: that no matter how unfamiliar the place, anyone can stand tall on the strength of their morality. I am a meagre part of that great soil.

I don't tell the truth to scare anybody. Bapu used to say that truth with arrogance is not truth at all. I speak to make myself even more humble, to learn, and atone for my contradictions.

If I cannot speak or write about it, I struggle with the truth. When I speak out in an effort to process what I observe and attempt to stretch myself beyond my many inadequacies, people ask me am I not afraid of the government? I am scared of my inadequacies. I speak and write to fight my inadequacies. And I lose many times. Then I tell myself, I may have failed this time, but I will make it next time. To speak truth to power is the display of the courage that our Constitution gives us. You are the guardian of this Constitution.

I am posting this publicly and sending a copy to you through the mail as well. If you know Nikhil Dadhich, Niraj Dave and Akash Soni, please ask them if they or if any of their groups have a plan to kill me. I'll also attach the link to the AltNews story. If I have disrespected you in any way in the course of writing this letter, I apologise.

Disclaimer: The opinions expressed within this article are the personal opinions of the author. The facts and opinions appearing in the article do not reflect the views of NDTV and NDTV does not assume any responsibility or liability for the same.
Comments
Ravish Kumar

In Srinagar, I Waited Four Nights for a Boat