The devastation and suffering due to the Covid pandemic is unparalleled and continues to unfold in its multiple dimensions. Amidst this colossal misery in India, the most excruciatingly vivid and heart-wrenching has been the migrant crisis triggered as a consequence of a sudden lockdown. As a nation, we witnessed the unfolding of the harrowing tragedy of migrant workers, where millions of them, particularly in our metro cities, were rendered jobless, with no wages, no food and no shelter. Considerations of social security or access to health were unimaginable. As a consequence, we saw lakhs of migrant workers undertake the painful journey of going back to their homes villages on foot while facing extreme heat, hunger, exhaustion and a repressive police force adamant on viewing these suffering millions as a law and order problem violating lockdown and not people in deep distress. Many died on the roads and most had to go through mind-boggling pain and misery.

Every year, December 18, as designated by the United Nations, is celebrated as the 'International Migrants Day' to highlight the contributions made by 272 million migrants across the globe, including 41 million internally displaced migrants.

Today, we must take a deep pause, to reflect on the post-Covid migrant crisis. As the Secretary General of UN, Antonio Guterres, said, "All migrants are entitled to equal protection of all their human rights"; in India, we must make a commitment to ensure that all migrants will have a life with dignity and all their rights as equal citizens of this country will be protected and promoted.

According to the World Economic Forum, India has approximately 139 million migrants. The 2011 census said that almost one-third of the combined population of Mumbai and Delhi constituted of migrants. Migrants as a category have staggering numbers in the country and in many ways are the backbone of the (unplanned) urbanization project of modern India. Surprisingly, despite the large numbers, the migrants as a political constituency have remained peripheral and their issues have limited uptake in the policy circles of governments and even in the welfare architecture of the country. 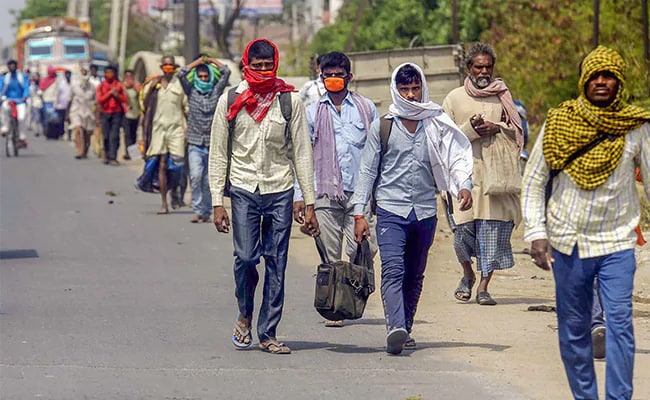 For a meaningful progression in addressing the issues of migrant workers, we need to engage with three critical underlying structural causes of the migrant crisis that often go unnoticed.

First is the 'sedentary bias' against migrants, which often clouds political narratives, public discourse and policy choices for migrants with far-reaching consequences on migrants' basic citizenship rights and their access to basic provisioning of welfare measures by the State. 'Sedentary bias' refers to the idea that migrants primarily belong to their place of origin or the source states. This bias often gets incorporated in public policies to the detriment of migrant workers. For instance, public services such as the PDS are not universally accessible. Ration cards made in the source state of the migrants cannot be used in the destination state which makes the PDS inaccessible to the migrant. In the present COVID-19 crisis, the sedentary bias of the policy framework became really prominent.

Second is the intersectionality and the overwhelming overlap of the migrant workers with the informal or unorganized sector workers. Amongst the three broad categories of migrants, all short-term and long-term circular migrants are part of the informal sector, and only a very small percentage of long-term permanent migrants are part of the formal sector or the top layer of the informal economy. As we are aware, the informal sector in India is largely ungoverned, does not recognize rights and is unprotected by the State and law. The informality that characterizes the informal/unorganized sector and the state's de-facto zero accountability towards it makes it a breeding ground for discrimination - the workers face very poor adherence to their human and labour rights, lack of dignity and of livelihood, unsafe and unregulated working conditions and lower wages among many other vulnerabilities. These vulnerabilities of the informal sector and migrant workers became more prominent as the entire country went into a state of suspension due to the lockdown. The current dominant trajectory of informalization of labour and dismantling of the workers' rights, as evident in the three labour codes passed by parliament in September, will only make the crisis for migrants more acute.

Third, a disproportionately high number of migrant workers come from socially excluded groups living in extreme poverty, particularly from Dalit and Adivasi communities. Barring a few exceptions, the deprivations and discrimination associated with their social location gets accentuated in the process of migration. An acontextual policy framing, without taking into account social exclusions for migrant workers, replicates unjust social hierarchies, including entrenched caste hierarchies.

A new framework rooted in a new imagination of a post-Covid world could possibly provide some solutions to the migrant crisis. This new imagination needs to traverse through the difficult questions of a secure work place to just work conditions on the one end of the spectrum, and decent living conditions and other socio-economic rights and entitlements on the other. It would also need to address other critical concerns including gaps in systematic data as exposed in the parliament when the government said that it could not provide number of deaths or livelihood losses for migrant workers during the lockdown; a gender lens to look at questions of migration from the perspective of women; decent habitat and guaranteed social security including socio-economic rights; and possibilities of building an empathetic public narrative on migrants while building a political voice for migrant workers. A non-negotiable minimum floor of dignity for migrant workers could be the fulcrum of this new imagination.

(Amitabh Behar, Chief Executive Officer of Oxfam India, is a civil society leader, and an authority on tackling inequality and building citizen participation.)

I Am Nidhi Razdan, Not A Harvard Professor, But...