The political takeover by VK Sasikala, J Jayalalithaa's long-time aide, has largely been obstacle-free. But with the AIADMK voting to make her the new Chief Minister of Tamil Nadu, she does face one potential challenge: the Supreme Court has said today that in a week's time, it will rule on whether she is guilty of charges of corruption in a three-decade-old case.

In 2015, the Karnataka High Court found both women not guilty of amassing wealth worth about 64 crores that they could not account for. Numerous relatives of Sasikala were also listed as co-accused. The top court will decide on a challenge to the acquittal.

Even though Jayalalithaa, as Accused Number One (or A1) in the court's verdict is no longer alive, Sasikala may not be off the hook.

The special prosecutor in this case, BV Acharya, told NDTV, "The charge of conspiracy against four accused (including Sasikala) remains. Merely because one conspirator dies, charges against others does not abate." 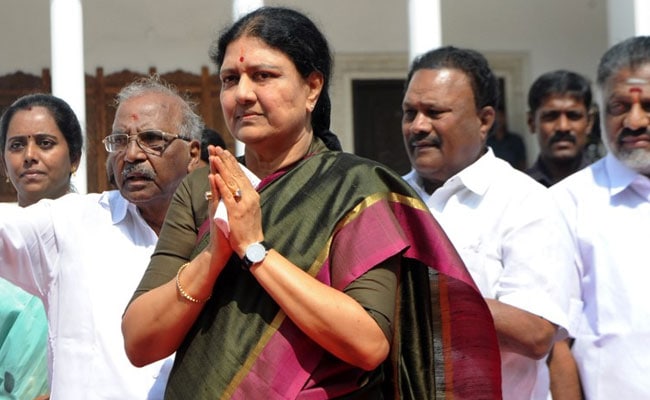 If anything, in a bid to ring-fence the late Chief Minister, Sasikala (A-2 in the chargesheet) and her relatives were found to be directors in 32 companies formed during Jayalalithaa's first stint as Chief Minister in the early 90s which picked up a series of land parcels across Tamil Nadu, transactions that form the core of the conviction by a trial court in 2014 that led to the women being jailed in Bengaluru for several months.

Sasikala was also the Director, along with Jayalalithaa, of two "parent" companies - Jaya Publications and Sasi Enterprises - through which cash was channeled to the  secondary layer of companies that bought the land. The trial court which convicted both women in 2014 found that those companies had no other source of income other than Jayalalithaa, suggesting that the money came from illicit means.

Given the strength of evidence, the High Court acquittal a year later, in 2015, which freed Sasikala and Jayalalithaa, allowing her return as Chief Minister, surprised observers; on closer scrutiny, the order was found to be full of loopholes (see our report here). At a basic level was the High Court's miscalculation of the amount of unaccounted wealth for which Jayalaithaa and the others were charged. The Judge found that the unaccounted wealth was under 10% of her income, which is legally permitted. He used this number as the basis for acquitting her and others. In 2014, J Jayalalithaa and VK Sasikala were arrested and imprisoned in a jail in Bengaluru.

The special prosecutor for the case, however found that the 10% figure was arrived at through a mathematical error: the actual figure was 76%.

Another discrepancy: the High Court order shows Jayalalithaa and Sasikala earning Rs. 4 crore from their company Jaya Publications, even though the defence itself submitted that they only earned Rs. 1.15 crore in the same period. The High Court judgement not only erroneously inflated Jayalalithaa's income, but also appears to have used unusual methods to bring down her expenses.

For instance, the High Court debunked the prosecution's claim that  27 crores had been spent by the late Chief Minister and her associates on renovating and constructing in a range of properties across Chennai and the state, finding instead that the amount was less than a fifth of that. Except the High Court arrived at this reduced figure based on an estimate given to the court by the Public Works Department of the cost of construction for a sentry shed!

The High Court also bafflingly ignored the testimonies of two key witnesses, both employees at Jayalalithaa's sprawling Poes Garden home who admitted to making repeated visits from the Chief Minister's to local banks to deposit cash.  In their testimony, they said they were depositing cash on the instructions of Sasikala, and that she handed over the cash to them.

It remains to be seen what the Supreme Court makes of the challenge to the High Court's assumptions. If it rules in favour of Sasikala, the last hurdle for her stands removed. If not, will Tamil Nadu see a repeat of a sitting Chief Minister forced to do jail time while a stand-in takes her place?

The Tamil Nadu secretariat or government headquarters may want to wait a week  before they do away with the nameplate: O Paneerselvam, Chief Minister.

Promoted
Listen to the latest songs, only on JioSaavn.com
(Sreenivasan Jain is Managing Editor NDTV 24x7 and anchors the ground-report show Truth-Vs-Hype)