Satellite images showing Ishinomaki in Japan before the tsunami (top) and the impact of it. Click for high res here and here

The word tsunami had entered the lexicon of journalists in newsrooms around the world after the December 2004 Indian Ocean tragedy, and on 11 March 2011, when news broke of tsunami waves striking the coast of east Japan, there was a sense that this had the potential of becoming a major crisis. Within hours, images had started coming in, of gigantic tsunami waves triggered by one of the most powerful earthquakes in human history, obliterating townships and parts of cities in the north-east of Japan. I remember anchoring 'breaking news' bulletins that day with a torrent of fresh images of the destruction coming in every few minutes. Little did I know then that I would be on a flight to Japan that night and in the worst-hit Miyagi prefecture forty-eight hours later. No one really knew the extent of the devastation in Japan. Yes, the images were shocking but this was Japan, perhaps the most developed nation in the world. Surely, the loss of life would be contained. In fact, the Indian electronic media decided to give the Japan story a complete miss. Except NDTV. We were the only Indian media team to get into Sendai.

The drive between Tokyo and Sendai is usually covered in a few hours on a superhighway but with parts of the road flooded or destroyed, we had to travel through narrow provincial roads. The journey took us over fourteen hours - painfully slow. When we reached Sendai late at night, we discovered the modern, developed city resembling a ghost town. Yes, there was electricity, but the roads were completely empty. Everything was shut. We drove into a hotel to be told it was closed - there was just one motel open - but by the time we reached, there were no rooms available. Every single room had been booked by the big international networks. After a freezing few hours inside our van and just a few hours of sleep, we woke up the next morning to the first of several aftershocks that continued to hit the area in the wake of the magnitude-9 earthquake which had triggered the tsunami in the first place. 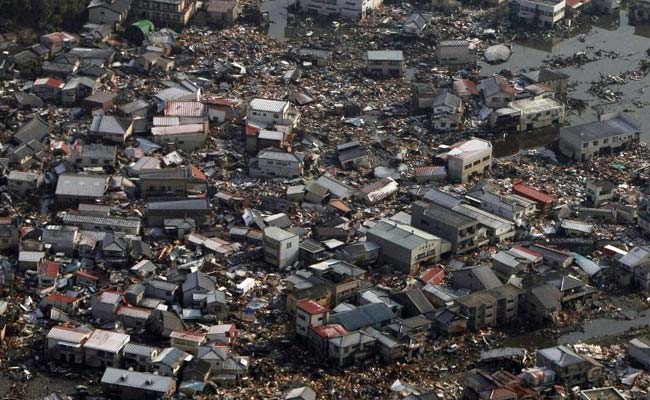 All that remained after the tsunami was debris

These were no ordinary aftershocks. Each major aftershock was upwards of magnitude 6 on the Richter scale. We could literally hear buildings around us groan. That day, forty-eight hours after the tsunami struck the Japanese coastline, once again I witnessed first-hand how devastating a tsunami could be. As we drove into the places worst hit, we saw entire areas flattened by the immense waves. Residential colonies, once occupied by thousands of people, resembled a war zone or an area in the midst of a bombing campaign. Not a single structure was intact - buildings had been yanked free from their foundations and dragged away to the sea. All that remained was debris. In the midst of the debris, on the banks of the Natorigawa, the only survivor I spotted was a poodle, looking for its owners. It followed us around for quite some time, perhaps hoping for some food. We had none to offer. Later that evening, we were finally able to get a room in the motel and managed a few hours of proper sleep, the first in days. We woke up the next day to the sounds of journalists racing down the stairs. There was an emergency and their embassies had told them to evacuate Sendai immediately. The nuclear plant in Fukushima was about to go into a meltdown. Given the prevailing wind conditions in the area, Sendai would perhaps feel the impact of nuclear fallout within minutes. This seemed unreal. Just how bad could this situation get?

Within hours, CNN and the BBC had pulled out their journalists. Al Jazeera had hired a plane to evacuate their reporters from an airstrip well to the west of Sendai and all the major French television networks were already on the road. None of this made sense to me at the time. My gut told me that the other channels were getting it wrong - that the sense of panic made no sense. No one could predict the situation at Fukushima, no one could know for certain that it was going into meltdown immediately. But then again, could senior editors and news desks from a dozen leading agencies all get it wrong? I spoke to my cameraperson S Dhanpal, a tough-as-nails NDTV veteran, about what we should do. We decided to wait. There had, after all, been no evacuation of Sendai that had been announced. Now among the last remaining international journalists in the Sendai area we faced a huge dilemma - to remain in the crisis zone and hope for the best or follow in the footsteps of other international media crew. My driver, a local from Tokyo, had already made up his mind - he intended to leave. What he had seen was enough for him. With the situation at Fukushima looking increasingly unpredictable, I telephoned our ambassador in Tokyo, Alok Prasad, and told him how international media had evacuated Sendai and asked him whether his sources were indicating that a core meltdown at the nuclear plant was imminent. Moments later, Ambassador Prasad called back to say that it was indeed wise to leave Sendai and head back to Tokyo. Yes, Fukushima was a developing situation, but there was no clear timeline for when anything catastrophic would happen.

Except, there was one problem. Returning to Tokyo would mean driving through Fukushima, a fact Ambassador Prasad was well aware of, but he felt the quickest and most direct route to Tokyo was still the way ahead - getting evacuated from elsewhere could have proven to be difficult, if not impossible. We packed all our equipment in our van and started the journey to Tokyo. We were stopped by a group of Australian journalists who didn't have transport. I made it clear to them that it was my intention to drive through Fukushima in taking the most direct route back to Tokyo and that once we started, there was no question of turning back. With no options available, they agreed, and had to constantly deal with their editors back home who apparently understood the ground situation better than they did.

With little fuel remaining in the van, we had to tank up in Sendai itself and at the only functioning petrol station only a limited quantity of fuel was being dispensed per vehicle, but of course we took what we got. For two hours, we waited in a queue of vehicles, not one car breaking the queue or trying to push ahead. Not one vehicle pressing the horn once. In fact, I had seen this over and over again in Japan. In the face of this huge tragedy, the Japanese people stayed calm and focused. Several of them would have lost friends and loved ones and food, fuel and supplies were not easily available. But there was no law and order problem, no looting, no hoarding. The police and civil authorities could focus entirely on doing the most pressing job at hand: saving lives. I remember standing in line with hundreds of Japanese citizens at one of the few soup kitchens in the vicinity of the motel we were staying in. The line stretched for several blocks, but people waited patiently, not one citizen trying to break the queue. There was no display of anger or of emotion. There was a solemn silence as people slowly reached the front of the line. And here the instructions were clear. Each person was entitled to one large meal in a soup bowl but if you were hungry you could go to the end of the line and await your turn again. By the time we managed to get fuel for our van, it was already early afternoon. We could manage to pick up only about 20 litres. It was unlikely that that would be enough to take us back to Tokyo but our driver was confident we would have enough to make it back to the Greater Tokyo area where we could refuel. As it turned out, he was wrong.

Within a few hours, the needle in the instrument panel pointed to empty. And worse still, the signboards along the road indicated that we were steadily approaching Fukushima. This was the last place to be stuck without gas. Some of the Aussie journalists with me in the van, clearly worried, started insisting that we head back. In situations like this, I have come to realize that second-guessing yourself is perhaps the worst decision to take. Yes, we had a problem and we had to sort it out. Sendai was too far away now and we would have been stranded in either direction. I told our driver to take us to a police station, which he did with the needle on the vehicle at empty. After explaining, as best as we could, that we were accredited international journalists looking to get back to Tokyo, the police signed off on a few papers allowing us to be granted emergency fuel. Except, there was one problem. The fuel station was more than ten kilometres away. Hoping for the best, we got back on the road, but for the longest time, there was no sign of any gas station. The emergency fuel warning light now started blinking. We were in Fukushima and we were about to be stranded in the vicinity of a nuclear plant which was about to blow. We were plain lucky when I spotted what looked like a small petrol bunker from the corner of my eye. The driver had missed it, as had the others. Much to our relief, that indeed was the emergency fuel pump the police had been referring to. We tanked up, and with the permission of the police, got on to the superhighway to Tokyo which had been shut down to normal traffic. Within three hours, we were in Tokyo, extremely exhausted but relieved that the decision to press ahead was the correct decision to have taken. Fukushima never did ultimately go into a catastrophic nuclear meltdown resulting in widespread contamination but it came very, very close.

(Vishnu Som was awarded a Ramnath Goenka award for best on the spot reporting for covering Fukushima and Sendai during the 2011 Japan Tsunami.)

Despite Opinion Polls, This Could Be Big Concern For Mamata