I tucked some 100-rupee notes into the hands of a 10-year-old girl yesterday at a village in Nandigram to make up for the sense of guilt that descended upon me as I traveled the pucca and kuccha roads of this battleground - once for land and now for Bengal. The girl is the granddaughter of one of many people killed in that troubled year, 2007, in political clashes. His family is impoverished, still reeling from the sudden death of the sole breadwinner and head of the family 14 years ago.

Guilt, because of infrequent visits between now and the tumultous months of 2007 when Nandigram was up in flames, never asking after the families of the martyrs of Nandigram and now here to report elections. But I remember why I had come the last time. On that visit, I was reporting on the seeds of a change taking place in Nandigram, a change that could determine the outcome of the vote tomorrow. Polarisation.

I had come to report on a school where the principal had been forced to apologise to his students because he had asked some of them wearing skull caps to remove them before entering the exam hall to take their Class 10 tests.

The incident in March 2017 had snowballed into protests by families who who demanded their children be allowed to wear the skull caps during exams. They had also protested against the position of urinals for male students in the school. All wrong, they said, according to Sharia. The principal, I recall, was a Hindu, the students, both Hindus and Muslims. I also recall the principal saying he was so shocked by the incident that he was seeking an immediate transfer. I cannot believe this is happening in Nandigram, he said.

The "this" is communal polarisation that has spiked from an undertow at the start of this year's Nandigram campaign to complete dominance by the end. A campaign that has seen Suvendu Adhikari of the BJP repeatedly addressing Mamata Banerjee as "Begum", repeatedly referring to to the threat of Nandigram turning into a mini-Pakistan if she is voted to power, repeatedly warning people that if the Trinamool wins this time, the Hindus will not be able to wear the traditional dhoti and the traditional tilaks (the smear of red on the forehead.) 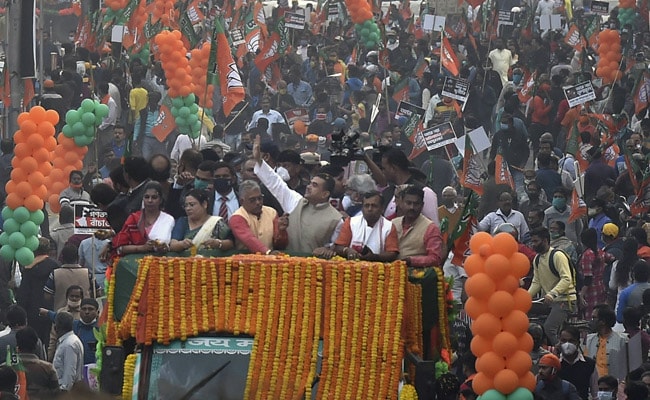 Suvendu Adhikari at a roadshow

Mamata Banerjee has not been able to stop herself from being drawn into this narrative. The day she first arrived in Nandigram to file her nomination and begin her campaign - the 9th of March - she spoke at her first public meeting at Nandigram her opponent's "70-30 formula". 70% Hindus versus 30% Muslims. That narrative carried on and saw her on the last day of her campaign talk about her gotra or caste. On Day One, she had said with great emphasis, "I am a Hindu girl". On the last day, her submission was: I am a Brahmin and I belong to the Shandilya gotra."

The demographics of Nandigram: there are claims and counter claims. 40 per cent muslim vote, say some. 30%, others. What I know most authoritatively is that Nandigram has about 26% minority vote. And this time, the fight is not for that 26%. It is for the balance 74% of the Hindu vote.

After the violent campaign of 2007 which culminated in Mamata Banerjee displacing the Left in Bengal, families of martyrs were paid compensation. The family I met said they got three lakh rupees and work for the widow for Rs 1,500 a month. She now gets Rs. 5,000. There has been some development in the area since then but there is little industry; agriculture remains the main source of income; those who don't own small patches of land earn from roles as daily wagers. The population has a large swathe of migrants, making it easier to push the agenda of othering. Appeasement and corruption have emerged as the huge concerns ahead of this election. 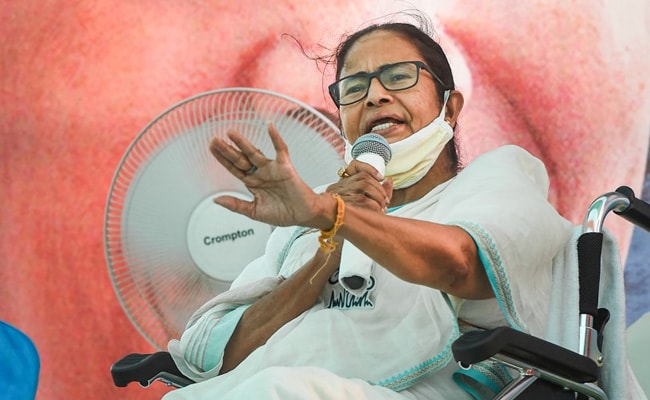 So, the BJP has pushed its agenda that Mamata Banerjee is pro-Muslim. As counter, Mamata Banerjee has visited multiple temples and chanted Hindu mantras. Will it work? If Suvendu Adhikari is described by some in the region as a "traitor", sections of Hindu voters say Mamata Banerjee's positioning as a proud Hindu is little more than an attempt to cover up her blunders of appeasement.

In this boiling cauldron of polarized politics, the heroes of Nandigram have slipped into the backbenches of collective memory for now. The inheritors of the Nandigram legacy of 2007 are living mean lives. The mother of the girl I gave a paltry 500 rupees to said the family's collective monthly income is about Rs 5,000. For a family of at least six persons. They have no land either. Of that money, she said, she just can't afford tuition for her daughter.

"Oar matha ta bhalo. Ami oke parashona korate chai. Kintu 500 taka tution dewar upaye nei," she said. She is an intelligent girl. I want to get her educated, but I can't pay her fees.

Uber Eats Driver's Death In US Is Every Immigrant's Worst Nightmare