Sreekanth Naidu was 30, based at Tirupati in the Chittoor district of Andhra Pradesh; as a stringer contributing to NDTV for the last two years.

Whatever time of day or night, weekday or weekend, working hours or national holiday, for every single news break in Andhra Pradesh and elsewhere, he would send an alert, often with visuals. If I didn't see or acknowledge his message, he would call. His network and ability to get news first and fast amazed me. I still don't know how he managed that speed and interest and excitement at all times, but I understood that is what made him what he was - a news person to the core.

I would acknowledge his contribution through tweets and a shared byline; he said this gave him more happiness and pride than any fee.

When NDTV or I would ask him to send a list of stories/vouchers so that he could be compensated, he would say that is not so important to him, he wanted to be acknowledged as a professional journalist and was proud to contribute to NDTV, that is all.

Even though he was not financially well off, he would use the money I sent to pay for blankets for the poor in winter or to pay for the education of a child in need. 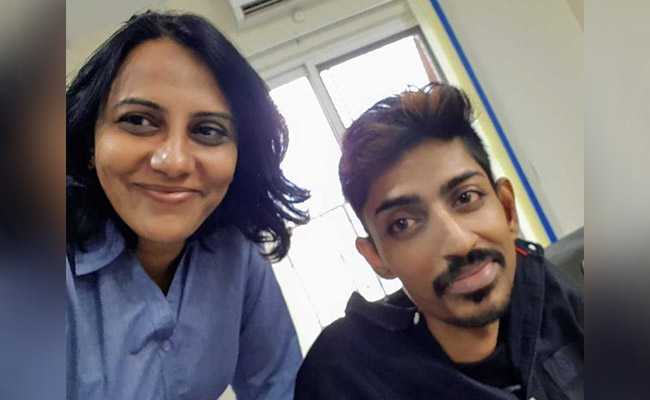 With Sreekanth Naidu at our bureau in Hyderabad

Sreekanth was extremely committed and professional. Competent, sensitive and ethical. Over the last two years, he was like a brother, a friend, always supportive, a most reliable colleague who would connect and speak with me every single day. He was so enterprising and well-networked that if I asked him for phone numbers or footage, from Kashmir or the US, he could organise and deliver the information.

He was severely disabled, couldn't walk or even drink a glass of water without help, but he used technology often to overcome his physical challenges. He was among the most tech-savvy people I know.

I hugely respected his positive attitude, refusal to wallow in self-pity. He was a wonderful human being - full of dignity and kindness. His spirit inspired me in my lowest moments.

Last week, he was breathless with a lung infection and hospitalised in Tirupati when I was leaving for Odisha to cover Cyclone Fani. I spoke to him over phone and told him we would get him out soon.

When I was in Odisha, with rare connectivity, the only person I called was him - not my elderly parents or daughter. I wanted to know how Sreekanth was recovering. He asked me, "If I die, madam, do you think the world will acknowledge me as a journalist who contributed something?" I said, "Yes, even now they do. But such a situation won't arise."

Sreekanth passed away this morning. I spoke to him last night when he promised to get back to good health and work at the earliest. For the first time, Sreekanth did not keep his word to me.

I feel bereaved today. It is a big loss to me and to NDTV. And Sreekanth, we all acknowledge your contribution, not just to journalism but to positive living.