I watched "Chhapaak" today with acid attack survivors. It was an eye-opener. Not that I imagined a roomful of devastated acid violence survivors...but I certainly didn't expect to see the kind of confidence and infectious enthusiasm that I did in that movie theatre in Lucknow.

After the special screening of "Chhapaak", I interviewed three of the survivors, who work at a café in Lucknow called "Sheroes Hangout". They laughed and sobbed as they watched, basically their own stories, on screen.

"I pursued my case for three years but all I got from the courts was 'tareekh pe tareekh' (hearing after hearing)," 21-year-old Jeetu Sharma", quoting a popular dialogue from the film 1990s film "Damini".

Jeetu's story is heart-rending. The man who attacked her with acid in 2014, when she was just 16, is out on bail and roaming free.

The 55-year-old man, her ex-colleague from an earlier sales job, used to stalk her, she says.

"I was working to supplement my family's income. I was a salesgirl. He used to harass me everyday, so much so that I quit my job . But he kept on stalking me. One day, I slapped him hard in the middle of a busy market. A few days later, he threw acid on me. I pursued the court case for three years, but there was no forward movement, so I stopped. The man is now out on bail," Jeetu shared. 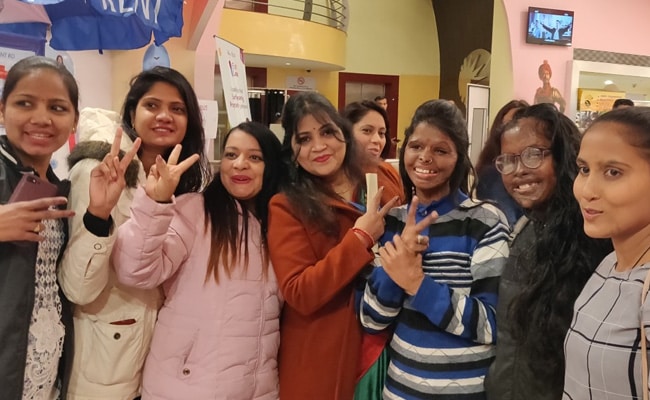 I noticed during the movie screening that Jeetu and many other girls with similar stories looked overwhelmed. I asked Jeetu what she thought of the film. "People ask about our lives, what we go through. This movie is a correct reflection of our hardships," she answered.

Another girl who watched the movie today morning was Rupali, a former Bhojpuri film artist from east UP's Ghazipur district. She was attacked on a film set in 2015 but her two attackers - a man and a woman - have not been caught till now. The police investigation into her case has not thrown up a motive in all these years. "Perhaps people were jealous of my work..." Rupali suggests. "It's a very nice film, a true reflection of our stories. I faced a lot of problems, but am very happy with my life currently..."

The special screening this morning was for acid attack survivors from the cafe in Lucknow.

Kunti Soni, who also had a part in the movie, was attacked in 2011 by her husband who suspected her of an affair. He was arrested, released on bail and later died in a road accident.

"I was happy to see family support for Deepika in the movie; it is something that every acid attack survivor needs the most. We all wept during the movie," she says.