How The Maharashtra Government Might Be 'Licensing' Gau Rakshak Violence

Pune, Maharashtra: Filming for the NDTV show Truth vs Hype last week, we caught on camera how an aggressive mob of gau rakshaks (cow vigilantes) forcibly stopped a truck on the outskirts of Pune, yanked the driver out, snatched his phone, and forced the truck to a police station.

All this, without even looking into the truck. Had they bothered, they would have found that there were buffaloes, not cows, in it. The slaughter of buffalo is permitted in Maharashtra, with conditions.

In the normal course, such vigilantism should invite the wrath of law.

But cops at the police station where the truck was commandeered had an excuse for not acting; they said the young man leading the mob, Subhash Tayade, had official permission to act against cattle slaughter.

This was official sophistry at its finest. Tayade, who claimed to be a member of Samastha Hindu Aghadi, a local pro-Hindu group, did indeed have an ID from the Maharashtra government, certifying him as an Animal Welfare Officer. 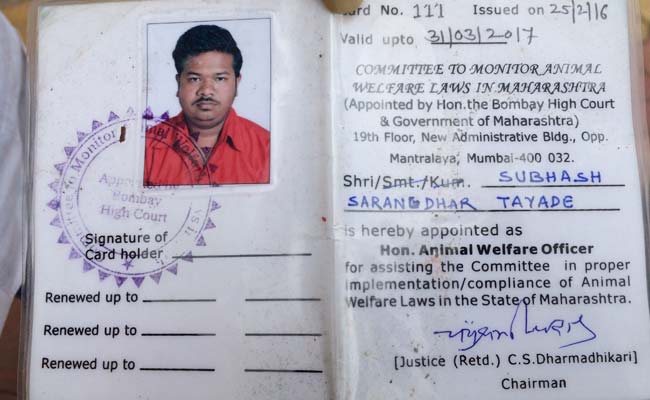 Subhas Tayade, leading the mob had official permission to act against cattle slaughter.

The ID was issued as part of a Bombay High Court order directing a committee to use citizen watchdogs to help enforce the ban on beef.

The committee members are tasked to inform government agencies, police and municipal officers about any violation of animal welfare laws and, if needed, detain vehicle carrying cattle until the police arrive. (The Indian Express reported last week that 1,900 people have volunteered to be watchdogs under the scheme.)

Using this fig leaf, police inspector SS Gaud said that Tayade did call the control room in advance and inform them about the truck.

The ID, however doesn't allow cardholders to use violent methods. It doesn't allow anyone without a card to act either. In the attack we witnessed, there was only one cardholder in a group of 20-odd men. 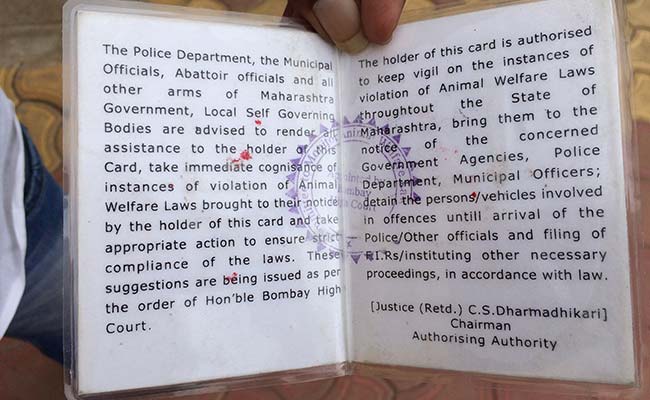 Subhash Tayade, who claimed to be a member of Samastha Hindu Aghadi, had an ID from the government.

To this, the police officer had no answers other than a "if you want to register a complaint, do it yourself."

In Amravati in Maharashtra's eastern Vidarbha region, when we posed a similar question to the Inspector-General, he said vigilantes acting on their own is "illegal".

But asked how many gau rakshaks accused of committing thuggery had faced police action, he said he did not have that information.

(With inputs from Sonal Matharu)