From Mumbai Hostel Room To High Seat Of Power: Rise Of Devendra Fadnavis

On October 19, on the day of the BJP's big win in the Maharashtra assembly election in 2014, I had tweeted this image of Devendra Fadnavis in his modest room in a MLA hostel in south Mumbai.

The MLA hostel where Devendra Fadnavis stays when in Mumbai. Trademark simplicity. pic.twitter.com/Qu8ml8Mhj1

It is here that the BJP's future chief minister would camp when he was in Mumbai; some distance from his home - and constituency - of Nagpur.

Five years and a full term as chief minister later, those modest ways have receded; no better example than a dramatic campaign video available on Mr Fadnavis' site, in which he plays a starring role.

The transformation from a low-key BJP strategist to a modern-day political campaigner is evident at a rally in Purandar, on the outskirts of Pune.

Here, I have observed a different Mr Fadnavis: assured, interacting with the crowds, and not afraid to take the odd barb at the opposition.

"Where is Rahul Gandhi?" he said in his speech. "I looked for him in Amethi, in Wayanad (Mr Gandhi's second constituency), in Maharashtra, in Haryana. Finally, I found he was in Bangkok," he said, drawing laughter from the crowd.

Three years ago, Mr Fadnavis' return to power did not seem so sure.

As Maharashtra's powerful Maratha community took to the streets demanding reservation in government jobs and educational institutions, Mr Fadnavis appeared fragile, all the more since the chief minister is from the politically marginal Brahmin community.

But a series of deft legal moves allowed him to clear reservation for Marathas, where multiple previous attempts had failed.

Mr Fadnavis has also proved adept at political manoeuvring, winning over the BJP's prickly ally the Shiv Sena, and forcing it to contest, for the first time, less seats than the BJP. (Of Maharashtra's 288 seats, the BJP is contesting 164 seats, the Sena 124). 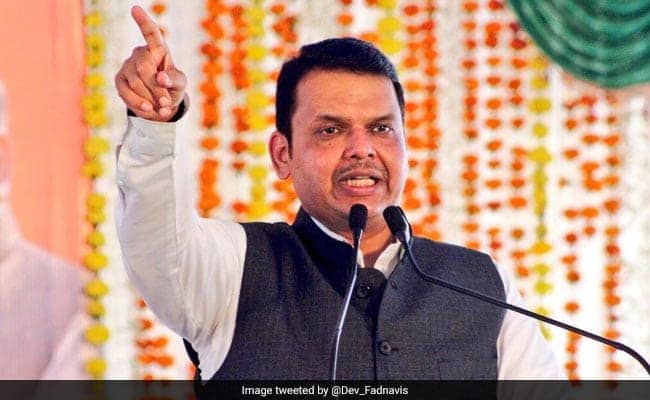 This taming of the Sena tiger, so to speak, was in part achieved by Mr Fadnavis' cultivation of select Sena members of his cabinet, like Vijay Shivtare, the junior Water Resources Minister, and the Sena candidate from Purandar, for whom the chief minister had come to campaign.

Mr Fadnavis also managed to largely silence the opposition through mass defections, including getting the Leader of the Opposition, the Congress party's Radhakrishna Vikhe Patil, to cross over.

Silencing his critics has allowed the chief minister's less than perfect record to go largely unchallenged.

For instance, several farmers we met not far from the rally, say they are yet to have received the benefits of Mr Fadnavis' much-hyped farm loan waiver. A report by news agency Bloomberg says that of the initial promise to waive off loans of 90 lakh farmers, only 44 lakh have so far been cleared for the waiver.

Regardless, a second victory for Mr Fadnavis will only burnish his political rise.

"Our dream is to have a Maharashtrian prime minister. Pramod Mahajan (the late BJP leader) died too early. Sharad Pawar was too self-centred in his politics. There is no one except Devendra Fadnavis. Five-ten years from now, he is the next PM of this country," Mr Shivtare said.

In Delhi's Air Pollution Emergency, What Changed And What Didn't