Blog: One Covid Shot Is No Protection, Cut The Gap For The Second

The good news on vaccinations became worse. Having only one dose of the vaccine offers no more protection from Covid than having none, according to a Ganga Ram Hospital study by Ruma Satwik and others. "A single dose offered no protection in our study against symptomatic infections (18% (-10 to 38) or any outcome of interest," the study said.

After the second dose the protection level jumps dramatically when compared to the first, especially against severe disease, oxygen therapy or death.

The implications of this are enormous. The gap between doses for Covishield was increased from 8 weeks to 12-16 weeks, which means that the vast majority of Indians who have had their first shot are as susceptible to infection as the unvaccinated population. And that is a whopping 43.55 crore (435 million) people who have had only one shot and remain extremely vulnerable. That is almost as many as the number of people yet to get their first shot. So effectively we still have around 900 million people - give or take - who are very susceptible to COVID-19. 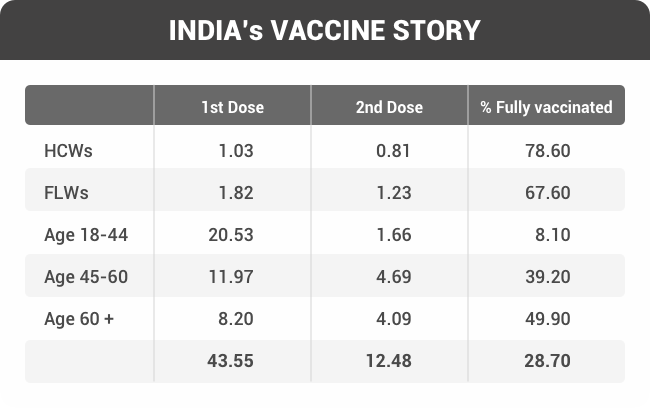 More worrying is the extremely slow pace of people getting their second shot. No group in the above table has as yet crossed the 80% vaccinated threshold. Given that the age group 60+ were the first to be cleared for inoculations, as they were seen to have the highest risk, it is surprising that just 50% of them are fully vaccinated.

With the numerous warnings that both central and state governments are putting out about the 'third wave", one has to seriously question the more optimistic predictions of a "milder third wave".

So what can be done to lower the risk of those who have had only shot?

First, given that the government has assured more vaccines this month on, and there is an upward trend in vaccination week on week this month, isn't it time to cut the gap between two Covishield shots to a maximum of 8 weeks? This would allow everyone who has had their first shot till the middle of June to join the second shot queue. Even if that is not politically palatable, the gap for people over 60 should be reduced immediately, and there must be a concentrated drive to get them and health workers fully vaccinated. It's time to say that health workers must be vaccinated or test daily.

Yes, this raises the moral dilemma of pushing shots for those who have already had one versus those who have had none, but if one shot offers no more protection than zero shots, boosting second shots would quickly reduce the risk of infection for a huge number of people. More importantly, it would reduce the spread of the infection.

Of course, such an approach would also tend to favour those in urban areas who so far have got the majority of the vaccination. Here's a quick look at Uttar Pradesh, which shows urban areas have almost double the number of fully-vaccinated people compared to rural areas. 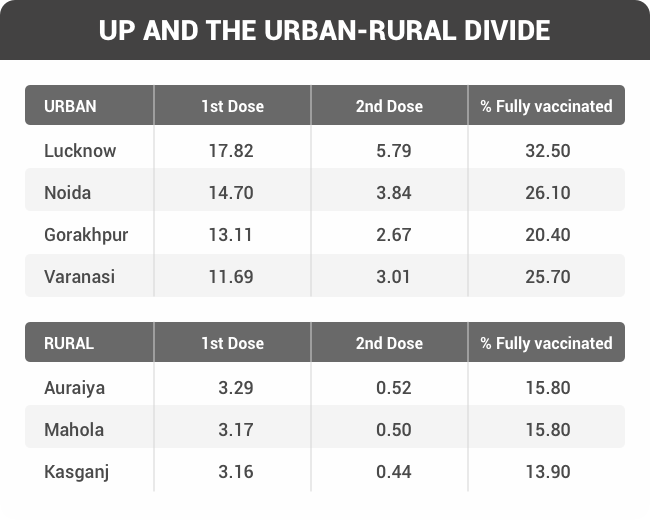 So, if the push was to double dose then the rural areas would have to wait longer for the vaccination drive to reach. (There are also political implications in states like UP going to the polls next year.)

The counter argument is that since urban areas tend to be more crowded, people live closer together and work closer together the likelihood of the virus spreading there is higher and faster. The Delta variant, according to the US Centre for Disease Control (CD) is at twice contagious the original one, which is why it spread so much faster. And in Maharashtra, that led the second wave, it was the urban centres of Mumbai, Thane, Pune and Nagpur that had the most cases(3).

While, the aim to vaccinate all adults by December is the stated policy, it is unlikely that we will reach that target at the current rate of vaccination. It needs a doubling from 5 million vaccines a day to 10 million. Of course, one shot vaccines are on the anvil, and those should boost the vaccination drive, but they are unlikely to be available in numbers that would change the current trajectory, which takes you well into the next year.

Vaccinations are not the only implication of this study. The way in which lockdowns have been eased and lifted also need to be examined in depth. Places like Delhi have opened up malls, cinema halls and restaurants without any rules or any basic norms. They have ignored the simple point that the virus is an aerosol and any air-conditioned space, even with very well-defined norms, is a Covid time bomb. Has the Delhi Government insisted on air purifiers, increased fresh air in air-conditioning systems and actually checked the social distancing in these spaces? Why haven't they prioritised all hotel and restaurant workers, mall employees etc for a early second vaccine? And how are they actually monitoring the entry of people into these enclosed spaces like malls?

Maharashtra, perhaps because it suffered the most, is unwilling to pander to business pressure groups and has adopted much more sensible (and politically damaging) rules. They have insisted on people being fully vaccinated to enter suburban trains, malls and restaurants. Even gyms are allowed to open only without air conditioning. Yes this is painful for the public and businesses but it recognizes that the Delta variant virus load is 1,000 times more than the original and can infecttwo-three times the number of people.

These restrictions exist in many countries which are ahead of us in the vaccination drive and we need to be more strict with our rules rather than bleating about social distancing and mask. Yes they are must, but as people we are not the best at following them even in normal circumstances. And the campaign on vaccination, and the daily coughing when you call on your mobile, needs to focus on people taking the second shot. A lot of people, having taken the first, are living under the false impression that they have some protection. This study clearly says they don't.

Of course, vaccination and curbs are not going to stop breakthrough cases as no vaccine is 100% effective, but almost all of them, when fully vaccinated, provide very high levels of protection from severe illness and death. That is about all we can seek to achieve.