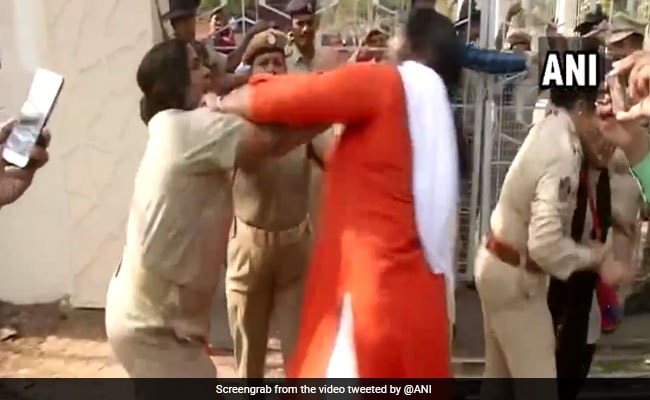 The leaders of the BJP's women wing were taken into preventive custody.

The members of the BJP's women wing -- that was staging a protest against the acquittal of the accused in a gangrape and murder case-- clashed with the police in Bhubaneswar on Monday. In a video, the BJP workers were seen locked in a bitter scuffle with the police personnel, who were trying to haul them away.

The BJP Mahila Morcha-- the women's wing of the BJP-- had organised a 'bangle rally' on Monday in protest of the acquittal of the accused in the Pipili gangrape and murder case, news agency IANS reported.

The BJP workers marched towards the state secretariat and residence of Chief Minister Naveen Patnaik. A scuffle broke out when the police tried to stop them.

#WATCH: Scuffle breaks out between the police and BJP Women Wing workers in Bhubaneswar during a protest over Pipili gang rape-and-murder case. #Odishapic.twitter.com/1uDq3PfhWH

The leaders of the BJP's women wing were taken into preventive custody after the scuffle.

She demanded a CBI probe into the gang-rape and murder.

On December 24, a Bhubaneswar court acquitted the two main accused in the 2011 gangrape and murder of a 19-year-old woman in Puri's Pipili district.