In Bengaluru, 10-Foot-High Froth At Bellandur Lake After All-Nighter Rain

In July, the sewage-filled froth of Bellandur lake travelled all the way to neighbouring Kolar district and reached a 1,400-crore water project.

Toxic white froth from the Bellandur lake in Bengaluru spread to the busy roads.

Bengaluru's Bellandur lake, infamous for its pollution, spewed froth and foam on to the busy roads surrounding it on Tuesday after overnight rain. Giant chunks of smelly, white froth - that looked like cotton - were carried up in the air and spread across the busy locality as cars and motorbikes passed by.

In several places, the thick froth from the 900-acre lake rose to almost 10 feet.

The toxic froth in Bellandur and the other lakes of Bengaluru has persisted for at least two decades and has become a regular phenomenon of sorts whenever it rains heavily. Three others lakes -  Yemalur, Varthur and Byramangala lake - also saw heavy frothing recently.

Chemicals and pollutants had the lakes frothing for decades but made international headlines when the lakes started breathing fire and smoke too in the recent years. 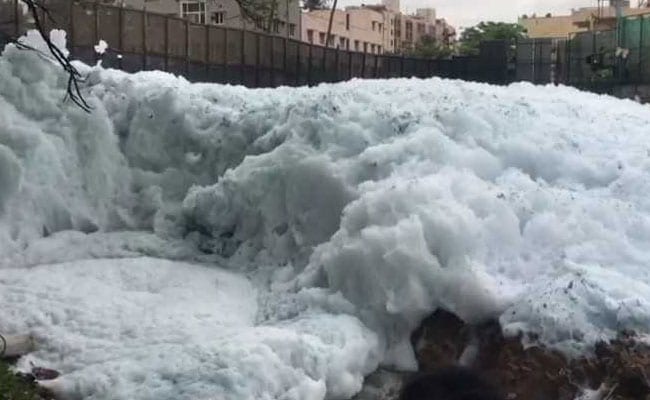 Bengaluru's Bellandur lake has become the largest septic tank in the city, the National Green Tribunal had said in June.

"We have issued notices to all concerned parties to respond to who release the water without treatment," said Laxman, the chief of the Karnataka pollution control board.

Bellandur lake has become the largest septic tank in the city due to "sheer callousness and indifference", the green court had said in June this year and ordered the Karnataka government to take action.

In July, the sewage-filled froth of Bellandur lake travelled all the way to neighbouring Kolar district and reached a 1,400-crore water project. Authorities in Bengaluru haven't been able to come up with a solution to stop the frothing of the city's lakes.

In February last year, huge flames were seen leaping off Bellandur lake, covering the region in thick smoke. The fire recurred in January this year, and around 5,000 army personnel had to be deployed. They managed to put out the flames only after a seven-hour battle.

The weather office in Bengaluru said the city got an average of 4 cm rain due to the southwest monsoon in the last few days. The rain is expected to continue for the next four days, the chief of the met department in Bengaluru said.