Water from the lake in south Bengaluru burst its boundaries on Sunday, flooding hundreds of homes. It still is not clear just why this happened. 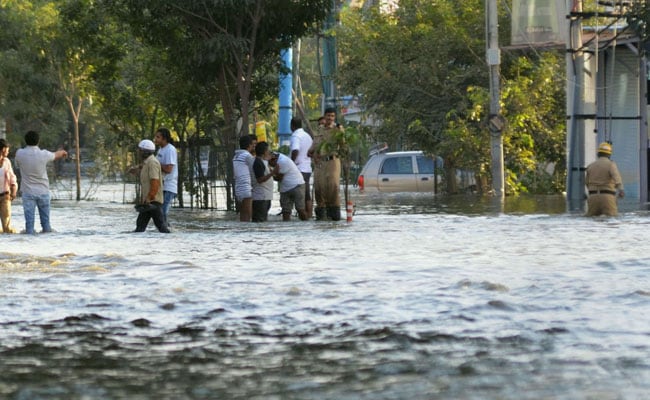 Kempajamma, who weaves flowers into garlands for a living, is still trying to clean up her home in Bengaluru's Krishna Layout that was flooded with water from the nearby Hulimavu Lake on Sunday afternoon. Like hundreds of others, Kempajamma is spending the night in a shelter set up by the Bruhat Bengaluru Mahanagara Palike (BBMP) - the administrative body responsible for civic amenities, coming back home in the daytime to try and clean things up.

"I was just sitting here. Then, suddenly in the afternoon the water came rushing in. People ran away. The water entered our houses," Kempajamma told NDTV.

Water from the lake in south Bengaluru burst its boundaries on Sunday, flooding hundreds of homes. It still is not clear just why this happened.

Mohan Krishna, BBMP's Chief Engineer of Lakes, was at the spot and he told NDTV, "Initially it started with a very small opening. Then due to the water pressure, the water rushed into the lower area. BBMP immediately took steps to construct a temporary dam. So now the flow has been arrested totally. We are concentrating on the restoration of the breached portion. The police are investigating to know why this happened. The lake is in the custody of BBMP. Budget allocation has been made but no work has yet started by BBMP."

The BBMP says it will soon start restoration and rejuvenation of the lake.

Another resident, Shivanna, told NDTV, "The water came into our house. The water stinks. It has never happened like this in the ten years we have been here. Even if it rains heavily, the water doesn't come in. Only this lake water has come in. We never dreamt that this would happen."

The matter is being taken seriously by the authorities. On Tuesday, Karnataka Chief Minister, BS Yediyurappa visited the people in shelters who had been forced to leave their homes. He also announced Rs 50,000 compensation for all 319 families who were affected by the lake breach, news agency ANI reported.

Karnataka's Lokayukta, Justice P Vishwanatha Shetty also came to the place where the water flooded out of the lake. He told NDTV, "If the rich have encroached they must be moved away. If the poor have encroached, alternative arrangements must be made for them."

Bengaluru has a sad track record of neglecting its water bodies until something goes terribly wrong. Bellandur Lake has been covered with foam and has even caught fire. Varthur Lake has also suffered in a similar way. The city which had hundreds of water bodies has seen many of them encroaches upon - both illegally and also officially with some lakes becoming bus stands and even a National Games Village.

Hulimavu Lake is the focus of attention right now. Hopefully this attention will help not only in its revival, but the revival of the city's other water bodies.