Green activists say Bengaluru's Cubbon Park has benefitted from the closure to traffic in terms of air quality and in other ways too. 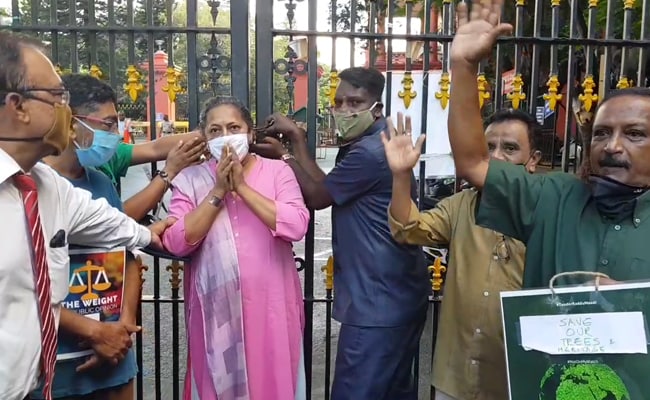 Bengaluru: Despite protests at the gate of Cubbon Park, traffic was going through the park.

The tussle over whether traffic should be allowed in Bengaluru's Cubbon Park continues. Traffic, which had been stopped from entering the park in the heart of the city's central business district, from the start of the lockdown, began again today. Green activists say the park has benefitted from the closure to traffic in terms of air quality and in other ways too. Representatives of the group Heritage Beku (we want our heritage) had written to the state Chief Secretary and approached others on the issue. But despite protests at the gate of the park this morning, traffic is now going through the park.

"The additional travel time required is two minutes. About 300 metres extra. Are you telling me that you and I cannot travel 300 metres more to save the trees, save Cubbon Park? All we are asking is do a pradakshina (circumambulation). This is like a temple for us. Air pollution, noise, crime, everything will rise if we have traffic through the park."

Cubbon Park is right next to the High Court of Karnataka, the Vidhana Soudha and several government offices. Deputy Chief Minister of Karnataka, Dr Ashwath Narayan, told NDTV, "The density of traffic is important and keeping traffic away from Cubbon Park is also important. So both concerns need to be addressed. The administration is working out how to address this. All three wings of democracy - judiciary, government and legislature, all three are in that premises. So there a lot of visitors, a lot of challenges."

"If Cubbon Park is kept free from traffic, it is good, but there are a lot of challenges. Work is going on around Vidhana Soudha. Once the Smart City work there is done, we can see how best we can restrict vehicles moving through Cubbon Park. Now, there is a lot of congestion, a lot of traffic. Gradually, both concerns will be addressed," he said.

Bengaluru's civic body council had agreed that Cubbon Park should be traffic-free and passed an order to that effect on June 30. Another big park in the city, Lalbagh, has been traffic-free for decades despite being in a high-traffic zone.

Heritage Beku and its supporters will continue to try and get the traffic stopped through Cubbon Park.

"We are at a loss to understand how this is happening. We will push further to see that this is stopped. But we can only do this collaboratively. What Covid has taught us is that we cannot ignore nature. We are saddened and deeply pained that this has been allowed today. We will keep talking to the government. We can only request," Ms Rajagopal said.

Traffic has built up once again in Karnataka's capital, notorious for its heavy traffic and traffic jams. For months, Cubbon Park was spared that and the hope of many people who use the park is that it can go back to being traffic- free once again.

Metro Rail Services Resume On The Green Line In Bengaluru