"Why Burn My House," Asks Congress MLA After Bengaluru Violence

The violence in India's IT capital followed a post on social media made by the nephew of Akhanda Srinivas Murthy - a post that was considered deeply offensive by many Muslims.

An emotional Akhanda Srinivas Murthy, the Congress MLA from Pulakeshinagar, says he is deeply hurt by the attack on his home in Bengaluru's D J Halli on Tuesday evening. The 50-year-old leader's home - along with two police stations - was the target of mobs that set fires, damaged property and threw stones. The violence left three dead and many injured, including dozens of policemen.

"Why have they attacked my house, I ask? What have I done? Any mistakes? If I have done any mistakes you can go to the police or media. I haven't done anything. So the attack is very sad to me," he says.

The violence in India's IT capital followed a post on social media made by the nephew of Mr Murthy - a post that was considered deeply offensive by many Muslims.

Mr Murthy said that this kind of violence was certainly not the correct response. Speaking to NDTV he says, "My nephew, sister's son - whoever it is. Whoever has done it is a mistake which the police will punish. Why they punish my house? What have I done to them? It is very sad. Should not do our house. Have I done any mistake? Front of my house is completely burnt. Nothing is there. All is burnt." 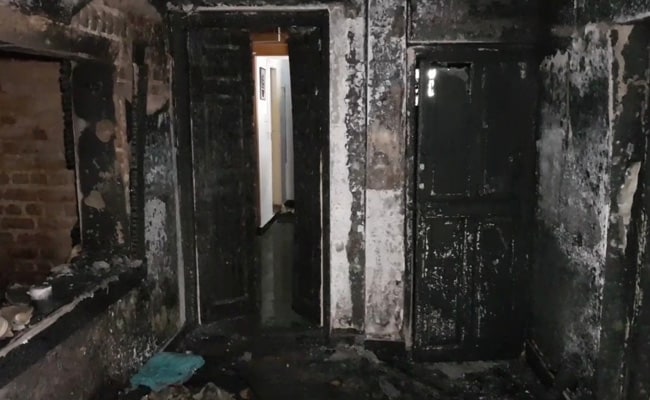 Akhanda Sriniva Murthy's house was targetted by the violent mob on Tuesday evening.

"I go to my constituency as a brother. Why have they targeted my house. If there is anything, come to me. One lakh voters in my constituencies voted for me. I am a servant. We are all brothers and sisters," he says.

He says he agrees with many other politicians who have said the violence was planned and not spontaneous. "It is 100% pre-planned," he says. "All party leaders are going as brothers here. Why have they targeted me only? Whoever has done this, let the police investigate them," he adds.

"Outside people have come and caused the whole situation. Whoever it is, let them be punished. I am telling police and government to investigate this," he says.

Mr Murthy has received support of other political leaders.

He has a message for the public. "We are also human beings," he says. "If we face problems, we will get sad. Public, I am requesting you - Let the police punish whoever has done. Even my sister's son, Naveen, what he has done, go to the police. Let them punish. Go to his house, go to police. Why have they come here? In my village other houses they also they have broken. Scooters also. Why have they done this?" he says.