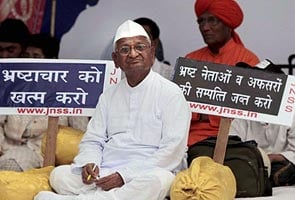 Bangalore: Braving the heat, power cuts and hunger, four dedicated souls continue to hold their fast at Freedom Park over the past two days in support of social activist and corruption crusader Anna Hazare's demand.

"There was no electricity since this morning. Even after repeated requests and pleas, power was resumed after almost 12 hours. Our only hope is that the bill should be passed," said Anand Yadwad.

"Anna is aged, but he is taking a step for a corruption free country. Why can't we?" asked Ashutosh Singh. He informed that a group from the Muslim community came to show their support and prayed for the well being of Anna and his supporters.

When asked what keeps them going, Negi said, "We get energy when we see people supporting us. A fast is a symbolic way to express grief over the corruption in our society. This step has at least made the government look up and take notice."

"Corruption lurks everywhere and even we were asked to pay a bribe last night when we wanted to use the washrooms in the park. We did not pay, but it shows how corruption is at the root," said Gandhi while appealing to people and join the cause to eradicate corruption.

Promoted
Listen to the latest songs, only on JioSaavn.com
During the past two days, nearly 200 people from all across the city visited Freedom Park to join these four on their indefinite hunger strike for the cause. However, the journey for the participants has not been easy.

Hazare wants the government to pass the Jan Lokpal bill to curb corruption, which was drafted by Justice Santosh Hegde, Supreme Court Lawyer Prashant Bhushan and activist Arvind Kejriwal His other demand is that the drafting committee should include members of the civil society.