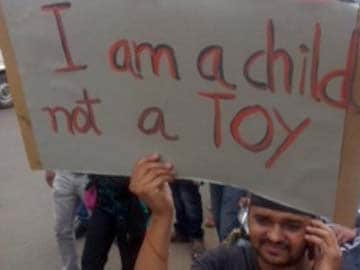 Bangalore: The alleged rape of a six-year-old at a prominent school in Bangalore that has enraged the city triggered more protests by parents today. .(Six-Year-old's Alleged Rape in School Sparks Anger In Bangalore)

Many protesters held placards of which read, "I Am A Child, Not A Toy" and "Stop The Shame Now." Parents said they want immediate arrest of the accused in the case and assurance that their children will be safe in schools. (After Six-Year-Old's Alleged Rape, Questions on Bangalore School's Role)

"I am scared to send my daughter to school now. Am not sure if she is safe there," said a worried parent.

Among the many protesters who shouted slogans like "we want justice," there was a young girl who had come with her one-year-old sister. A poster in her hands read - "Shame, Shame. Save My Little Sister."

On July 2, a six-year-old first grade student was allegedly raped by two gym instructors at the elite Vibgyor High School in the city.

As a "punishment" for misbehaving, she was reportedly asked to leave her class and stay in an empty room used for storing gym equipment. She was allegedly assaulted there.

Her mother found out about the assault seven days later, when a private nursing home hinted that the child could have been raped.

Though three people have been detained by the police, no arrest has been made yet.

Defending the probe, Police Commissioner Raghavendra Auradkar said, "The incident involves a minor girl. We have to deal with the case carefully and respond sensitively."

"We are hugely pained by the incident. Have trust in the police," he told protesting parents in order to pacify them.

Promoted
Listen to the latest songs, only on JioSaavn.com
Angry parents had stormed the school on Thursday, asking why the little girl was locked up in an empty room. The school claims that she left the classroom to use the toilet.