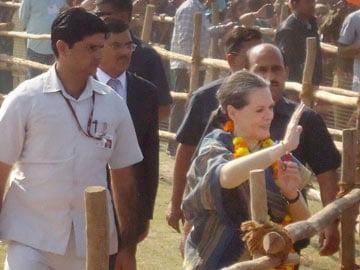 Congress President Sonia Gandhi waves to party supporters during a rally in Rajasthan.

Udaipur: Political parties are leaving no stone unturned in the tribal region of southern Rajasthan as it is said whoever wins Mewar will rule the state.

In this region of Mewar and Wagar, which comprises 28 assembly constituencies, the ruling Congress is capitalising on its various welfare schemes whereas BJP is trying hard to bring the voters to its fold.

Politicians consider this region a key battleground and believe that the party which wins the majority of seats in Mewar will form the next government.

This is why no party can ill afford to ignore the significance of this region adjacent to Gujarat.

"We (BJP) won 22 out of total 28 seats in 2003 and the party was comfortably able to form the government. Last time, Congress got majority of the seats but this time we will reverse this tally and win most of the constituencies, and will form the government," he claimed at a public meeting in Mewar.

A six-time MLA, Kataria lambasted Ashok Gehlot-led Congress government which he said has lost ground for ignoring the region.

"In the last five years, the government made budgetary provision of only Rs 1,973 crore for Mewar, this share should have been around Rs 22,000 crore (in five years). This government has ignored Mewar now it will go (lost)," he said.

Udaipur MP and Congress leader Raghuveer Singh Meena also acknowledged the importance of the Mewar region, which is better known as the land of historic valiant Rajput rulers like Maharana Pratap.

"A party getting mandate on majority of seats in the region remains comfortable towards government formation. None can overlook the importance of this region," he told PTI.

Meena while rejecting the Opposition's allegations expresses confidence that the party would more or less hold its position in Mewar and would retain power.

These 28 seats are spreading over six districts of Udaipur division - Udaipur, Banswara, Dungarpur, Pratapgarh, Rajsamand and Chittorgarh. 20 seats are reserved for ST and one is for SC candidate.

In 2008 assembly elections, Congress won 20, while the BJP got six seats. One seat each was won by JD-U and an independent, who later supported the Gehlot government.

Besides the Congress and BJP, this time a tribal leader and former BJP stalwart Kirori Meena is also trying to penetrate the region, and started rallies well before the campaign of both the parties.

He is leading former Lok Sabha Speaker P A Sangma's National People's Party and has fielded candidates in 150 seats of the state, many of them BJP and Congress rebels.

"My party will get a good share of seats this time across the state. In Mewar, I am targeting at least 8 seats," Meena, who parted ways from BJP after 2008 poll debacle, said.

Congress leader Dinesh Khatolia highlighted that Ashok Gehlot government took several initiatives for the development of the region which include Dungarpur-Ratlam via Banswara rail line, besides several social security programmes, special package for tribal sub-plan area and other initiatives.

"Majority of people are farmers or labourers or layman who earn daily wages. They earlier had to go to other areas for earning livelihood but MGNREGA has proved to be a boon for them. MGNREGA has solved the problem of unemployment," Udaipur MP Raghuveer Meena said.

Promoted
Listen to the latest songs, only on JioSaavn.com
199 seats out of total 200 in the country's largest state will go to polls on December 1 whereas polling for the remaining one seat will take place on December 13.