10 things you want to know about Akhilesh Yadav 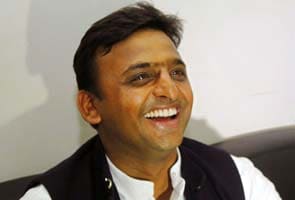 New Delhi: Uttar Pradesh was spoilt for choice. A crush of political celebrity from all over descended upon it in the last few months in an attempt to win it over. UP chose one of its own - Akhilesh Yadav, the quintessential local lad, who was born here and has learnt his politics on the dusty kuchcha roads of the UP heartland, is the new UP Chief Minister.

Akhilesh combined those earthy lessons with a progressive, new-age outlook to pull his party out of a political morass. In 2007, the Samajwadi Party was all but written off when Mayawati swept UP, washing the entire state in the colours of her BSP. The Samajwadi Party had lost the support of even its most loyal votebanks - political misadventures like shaking hands with Kalyan Singh, seen as the face of the Babri Masjid demolition, did not help its cause. In 2009, more setback. The SP could manage only 24 Lok Sabha seats, 11 short of what it had held. The party needed resuscitation.

Father Mulayam Singh Yadav turned to son Akhilesh.  In June 2009, Akhilesh Yadav was handed UP as its state president. The Congress' Rahul Gandhi was making waves with his youth agenda and the SP seemed to take a cue. Akhilesh had so far had charge of the youth wing of the SP. Now he had the big task of infusing fresh life into a floundering party. There were slips, hard lessons and hard steps. On his way to the spectacular victory of March 6, 2012, the younger Yadav had to remodel the party's image, step on many toes, pump in ideas that seemed antithetical to the SP way of thinking.

So who is Akhilesh Yadav? Here are 10 things to know about UP's new CM:

1) Akhilesh is 38. He was born on July 1, 1973 to Mulayam Singh Yadav and Malti Devi in Saifai of Etawah district in UP, their only son.

2) It is a disservice to Akhilesh to call him foreign-educated. He has a Sainik school education - still considered in many parts of India as the most disciplined schooling that a young boy can get. He studied at the Sainik School in Dhaulpur, Rajasthan. Akhilesh then did his Bachelor of Engineering and Masters of Engineering in Civil Environment Engineering at the University of Mysore in Karnataka. Only then did he get his "foreign education" - a Masters degree in environmental engineering from the University of Sydney in Australia.

3) Akhilesh is married to Dimple, made famous by her attempt at politics in a 2009 by-election in Ferozabad. She was contesting for a seat that her husband had won and vacated less than five months before. She lost to the Congress' Raj Babbar, a former Samajwadi Party man. The SP had thought this was a sitter; the Congress made it a prestige battle, with Rahul Gandhi leading a pantheon of leaders to campaign for Mr Babbar. Akhilesh and Dimple were married in November 1999. Akhilesh seems to wear his heart on his sleeve when it comes to his winsome wife. He is variously quoted to have declared his love for her and has even said that "shaadi hote hi kismat khul gayi (got lucky as soon as I got married)."

4)  Akhilesh and Dimple have three children - Aditi and twins, Arjun and Tina. The savvy politico played family man to the hilt yesterday, with his camera friendly little daughters making a debut on national television as family Yadav celebrated their win.
5) A keen environmentalist, Akhilesh was contemplating taking up water pollution projects when his father drafted him into politics. He lists his profession on his official Lok Sabha bio data as Agriculturist, Engineer and Political and Social Worker.

6) Akhilesh is a die-hard socialist. Get him talking and he would like to talk at length about Ram Manohar Lohia.

7) Politics for long has meant leading youth of the party on a bicycle, his party's political symbol, door to door; he was 27 when he entered the Lok Sabha first, winning from Kannauj in 2000, when his father Mulayam Singh vacated the seat having won two - Mainpuri and Kannauj. Mr Yadav has been the Kannauj MP since. In the 2009 Lok Sabha elections, Akhilesh contested two seats and won both. He kept Kannauj and gave up Ferozabad.

8) He took over as the SP's UP president in June 2009. He had already been heading the party's youth wing for some time. His first task he had said then was to review his party's electoral setbacks to draw vital lessons and take corrective action.

9) Akhilesh's magic UP potion involved attempting to strip the party of its image as a "party of goons" in the words of political rivals. He insisted on hand-picking candidates for the UP elections unmindful of whose feet he stepped on, also famously keeping the likes of DP Yadav away from the party. Through his campaign he talked law and order as his party's foremost agenda and after the SP's win promised UP freedom from Goonda Raj. He had other challenges. Three years ago, before the 2009 General Elections, the SP had said it was against the use of English and the use of computers. By 2012, the SP manifesto was the first to promise laptops and tablets for students who completed school-leaving. The manifesto is forward-looking with an accent of education and Yadav Junior has promised it will be implemented in full. Among the many changes the younger Yadav is credited with, is bringing in more young, educated professionals into his party, including the IIM-educated Abhishek Mishra who won from Lucknow-North seat and is already making waves.

Promoted
Listen to the latest songs, only on JioSaavn.com
10) Winning UP was hard work. Akhilesh traveled about 10,000 km and held 800 rallies in UP over the last six months.