Voting on in 230 Assembly seats of Madhya Pradesh. Results to be declared on December 11

After weeks of high decibel campaigns, polling for the 230-member Madhya Pradesh Assembly began at 7 am on Wednesday. The BJP is eyeing a fourth straight term in office, while the Congress is hoping for a comeback in the state, which was once its stronghold. Leaders of the two main parties, Shivraj Singh Chouhan and Kamal Nath cast their votes after doing puja at temples in their respective constituencies.

Chief Minister Shivraj Singh Chouhan and his wife offered prayers on the banks of the Narmada River in Budhni. Later he also visited his village. "Today, in my native village Jait, I performed puja and prayed for the welfare, happiness and prosperity of the people," said Mr Chouhan, and urged voters to "reach the polling stations" and exercise their voting rights.

"We're 100 per cent certain that BJP will form government with an absolute majority. We have set a target of 200 seats and our lakhs of volunteers are working to make it a reality," said Mr Chouhan, who
last evening chose to unwind with his family, over a cup of coffee and vada-sambhar at an eatery in Bhopal's TN Nagar. 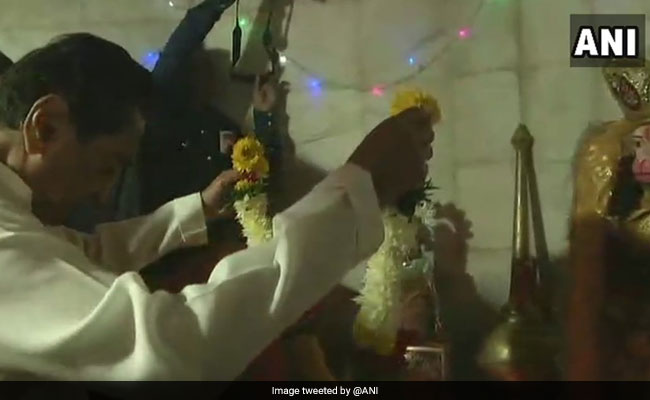 Ahead of the polls, Congress chief Rahul Gandhi, in an open letter to the people of the state, made a fervent appeal to support his party and help provide good governance. The battle of ballots in Madhya Pradesh is being seen as a precursor to the parliamentary elections in 2019. The results of today's polls will be declared on December 11.

Madhya Pradesh Polls: BJP Leader Comes Out To Vote On A Horse Chariot