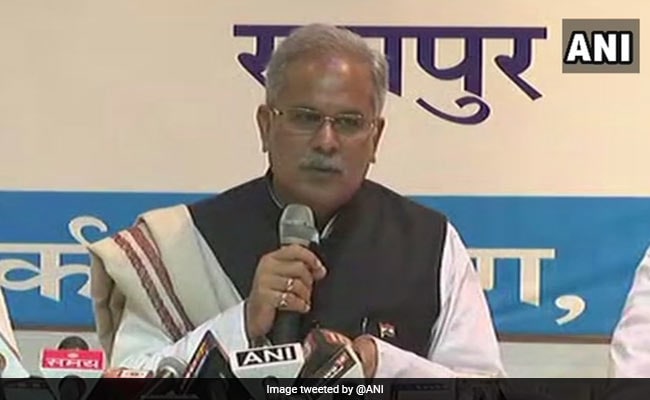 At a press conference in Raipur, Chief Minister Bhupesh Baghel said, farm loans will be waived off

Hours after taking oath as the Chief Minister of Chhattisgarh, Bhupesh Baghel made three key announcements: a huge farm loan waiver, increased minimum support price (MSP) for maize and a special investigation team to probe the Jhiram Ghati Maoist attack in 2013 that wiped out the Congress leadership in the state.

"Congress president had announced that farm loans will be waived off within 10 days and MSP for maize will be increased from Rs 1700 to Rs 2500 per quintal. These two decisions have been taken," Mr Baghel said on Monday at a press conference, flanked by two of his top ministers TS Singh Deo and Tamradhwaj Sahu, who were also the contenders for the Chief Ministerial post.

Short-term farm loans to the tune of over Rs 6,100 crore of over 16.65 lakh farmers, drawn from cooperative banks and Chhattisgarh Gramin Banks, as on November 30, will be waived immediately and loans borrowed from commercial banks will also be waived after proper examination, said Mr Baghel, after chairing the first cabinet meeting of the newly-formed Congress government in the state yesterday.

The agricultural loan waiver was the Congress' key promise to the farmers of Chhattisgarh ahead of the Assembly polls. Madhya Pradesh Chief Kamal Nath also waived farm loans as promised at the time of elections, shortly after he took oath as the Chief Minister.

"Our third decision is related to Jhiram Ghati. 29 people including prominent leaders like Nand Kumar Patel were killed. The conspirators have not been exposed. No such massacre of politicians ever took place in history. To catch the culprits, SIT has been formed," the newly-elected Chief Minister said, adding that the incident was a "criminal political conspiracy."

In May 2013, Maoists ambushed a convoy of a number of senior Congress leaders. The attack had left at least 27 dead, including former Chief Minister Mahendra Karma and the party's state unit chief Nand Kumar Patel.

"The problem of Naxalism is very serious. Nobody can solve it instantly. They have a strong hold in the area. We will be successful in eliminating them if firm steps are taken with the support of the people in the Naxal-affected areas," Mr Baghel said.

Congress assumed power in Chhattisgarh after ousting the Raman Singh government after 15 years. The party won 68 seats in the 90 member state Assembly.