Farmers are protesting the YSR Congress' move to shift the state capital from Amravati. 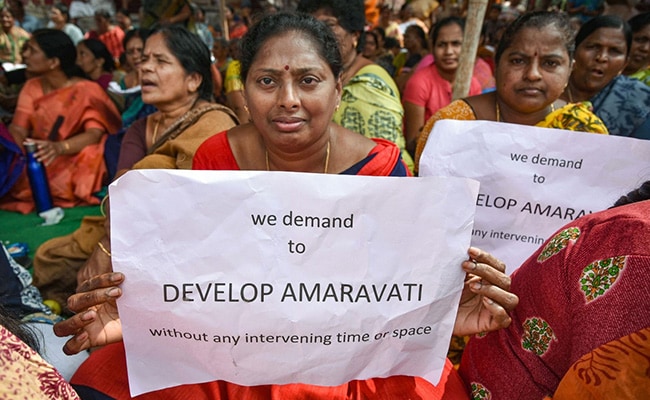 Two Telugu Desam Party (TDP) lawmakers were placed under house arrest in Andhra Pradesh's Vijayawada to allegedly prevent them from attending a farmer agitation on Thursday, a day ahead of a high-profile meeting to approve Chief Minister Jagan Mohan Reddy's "three-capital" formula.

Cabinet members are also expected to discuss matters related to the location of the state capitals at the meet, sources said. Farmers who donated land for the state capital as part of the previous TDP government's plan have taken up an agitation to demand that the move to shift it from Amaravati be dropped.

The move to place TDP MP Kesineni Srinivas and MLA Buddha Venkanna under house arrest drew a sharp response from party chief Chandrababu Naidu, who accused the YSR Congress government of displaying a "unilateral, dictatorial and suppressive attitude". According to news agency ANI, the police feared that the public representatives would take part in a demonstration called by the Rajadhani Parirakshana Samiti at Prakasam Barrage.

"It is undemocratic to prevent public representatives from going to a meeting of the Amaravati Parirakshana Samiti Joint Action Committee. The YSRCP government is creating panic among the people of 29 villages. They have created a police raj through the deployment of thousands of police personnel," he said.

He also accused the YSR Congress government of needlessly raising a question mark over developing Amravati as the state capital. "They are trying to gain political mileage through divisive politics. Freedom of expression is being suppressed. The YSRCP government will pay for its unilateral, dictatorial and suppressive attitude," the former Chief Minister said.

Farmers stayed back to protest in Amravati's Mandadam village - where the cabinet is supposed to meet - in defiance of prohibitory orders, news agency PTI reported. A large police contingent has been posted in Mandadam and other villages to thwart any attempt by protesters to storm the secretariat.

"We will review the situation later and take appropriate action," a senior police officer said, indicating that the protestors will be evicted forcibly if required.

The former Chandrababu Naidu government wanted to build the capital city of Andhra Pradesh in Amravati, but the move was withdrawn after Jagan Mohan Reddy took over. The present government wants to build three separate capitals in different parts of the state.