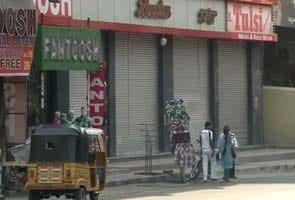 Hyderabad: Life across Andhra Pradesh's Telangana region was affected on Tuesday due to the shutdown called by the Telangana Rashtra Samithi (TRS) to protest the central government's insensitivity towards the demand for a separate Telangana state, which is driving youth to commit suicide.

The shutdown had little impact in Hyderabad but was felt hard in the nine other districts of the region. Barring attacks on a few shops in Khammam, the shutdown remained peaceful.

State-owned Road Transport Corporation (RTC) buses were plying normally as the TRS has exempted the bus transport service from the shutdown in view of the ongoing Class 10 class examination. The protestors, however, stopped private vehicles.

In Hyderabad, there was hardly any impact. Educational institutions remained shut as a precautionary measure but shops and other business establishments worked as usual. Traffic on roads was also normal.

Police tightened security at Osmania University, the nerve centre of the earlier phases of agitation for a separate state. Police arrested TRS workers when they tried to take out a rally in Tarnaka near the university campus.

The impact was more in Warangal, Karimnagar and Medak districts. Police have made elaborate security arrangements to prevent any untoward incident.

A daily wage earner also set himself on fire in Wanaparthy town of Mahabubnagar district on Monday but escaped with injuries.

TRS and BJP activists took out bike rallies in Warangal, Karimnagar, Medak, Nizamabad, Adilabad and other districts. The protestors set afire effigies of the central and state governments to protest what they call "callousness" towards the demand for a separate state.

TRS claimed that the shutdown evoked support from all sections of people and the businessmen voluntarily downed their shutters.

CPI activists attacked some shops which were open in Khammam town. A hotel in Manchiryal town of Adilabad district was also damaged.