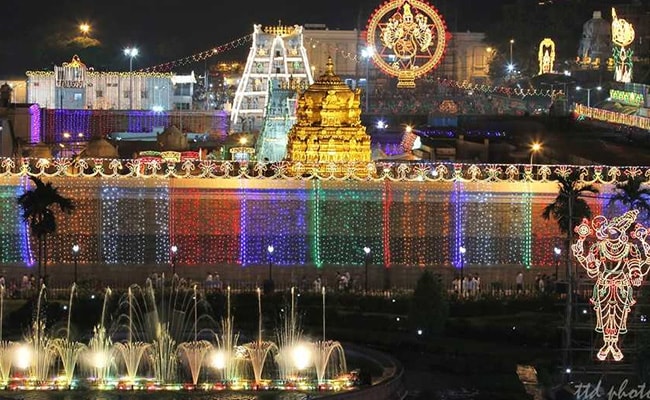 A large number of devotees had taken to social media, airing their ire (File)

The famous hill shrine of Lord Venkateswara at Tirumala today withdrew its decision to bar the entry of devotees into the temple for six days from August 11 due to a special ritual held once in 12 years, and said it would allow a few thousands daily.

The Tirumala Tirupati Devesthanams (TTD) Board reversed its July 14 decision after Andhra Pradesh Chief Minister N Chandrababu Naidu intervened and advised it to strike a balance and ensure that the ritual and devotees were not affected, its chairman Putta Sudhakara Yadav said.

Mr Naidu's intervention came amid criticism of the TTD's decision to bar the entry of devotees to the temple which attracts huge number of pilgrims from across the country throughout the year.

A large number of devotees had taken to social media, airing their ire over the proposed six-day ban.

At an emergency meeting on July 14, the TTD board had resolved to bar devotees from entering the temple from August 11 to 16 due to the upcoming event of 'Astabandhana Balalaya Mahasamprokshanam', a ritual performed once in 12 years.

According to temple officials, during the ritual high priests plug minor cracks and holes inside the sanctum sanctorum of the 2,000-year-old temple using a paste made of several herbs, stated to be harder than concrete mix, amid chanting of Vedic hymns.

Mr Naidu had asked the TTD officials to allow as many pilgrims as possible without any disruption to the ritual.

Addressing a hurriedly convened press conference along with TTD Executive Officer Anil Kumar Singhal at Tirumala today, Mr Yadav said they have decided to allow a few thousand devotees at prescribed timings daily during the ritual period following instructions from the chief minister.

The mid-August period usually attracts about a lakh pilgrims daily and the temple management cannot facilitate 'darshan' for all during the ritual period, temple officials said.

The TTD board will hold a special meeting on July 24 and take a final decision on how many devotees should be allowed and at what time, they added.