Had To Break Into Homes To Rescue Unconscious Victims: Vizag Officials

The leak at LG Polymers India Pvt Ltd began at about 2.30 am. Officials who rushed to villages around the plant said people were fainting in the streets

LG Polymers: Rescuers help a man exposed to gas that leaked from a plant in Visakhapatnam

In the hours after a gas leak hit villages around a chemical gas plant in Visakhapatnam, rescue officials broke into houses where people had fallen unconscious and moved them to hospital, the top police officer of Andhra Pradesh told NDTV.

Gautam Sawang, the Director General of Police, also said that two of the nine people killed in the gas tragedy died after they became dizzy and fell into a well.

The leak at LG Polymers India Pvt Ltd began at about 2.30 am. Officials who rushed to villages around the plant, which is owned by a firm from Southern Korea, said people were fainting in the streets.

The plant makes polystyrene products, according to a company website, which are used in manufacturing electric fan blades, cups and cutlery and containers for cosmetic products such as make-up. The raw material, styrene, is highly flammable and releases a poisonous gas when burnt. In a statement, LG Chem said that the gas emitted in the leak can cause nausea and dizziness when inhaled, adding that it was seeking to ensure casualties received treatment quickly. 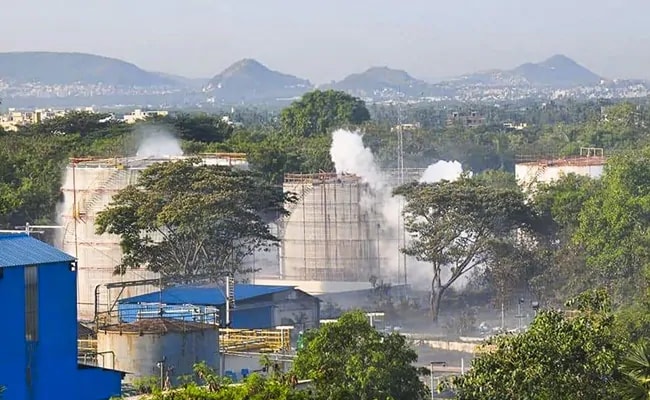 A company spokesman in Seoul said separately a night shift maintenance worker had discovered the leak from a tank. The plant was suspended because of the nationwide lockdown to stop the spread of the coronavirus outbreak and it was preparing to resume operations, the spokesman said.

"(The gas) was left there because of the lockdown. It led to a chemical reaction and heat was produced inside the tanks, and the gas leaked because of that," said Swaroop Rani, assistant police commissioner in Visakhapatnam. She said local villagers raised the alarm about 3:30 am, saying there was gas in the air, and police officers who rushed to the scene had to quickly retreat for fear of being poisoned. "One could feel the gas in the air and it was not possible for any of us to stay there for more than a few minutes," she said.

LG Chem confirmed the plant was not operating because of the lockdown, but said there was maintenance staff at the facility.

"The unfortunate event took place past midnight when they tried to restart the polymer plant which is pretty old - maybe if it was done in the day time, people would have been more alert and able to move away," P Ramesh, secretary to the chief minister of Andhra Pradesh, told Bloomberg.  The government will issue new safety guidelines for factories being restarted after the lockdown to avoid more such accidents, Mr Ramesh said.