It has been a tradition in Kurnoool district's Kairuppala village to form teams and throw cow dung cakes at each other during the Ugadi celebrations.

The densely packed crowd violated all norms of social distancing during the event.

Huge crowds of people, squeezed shoulder-to-shoulder with several defaulting on wearing masks, were seen celebrating Ugadi in visuals from Kurnool district of Andhra Pradesh, at a time when the country is grappling with the deadly second wave of the pandemic.

It has been a tradition in Kurnoool district's Kairuppala village to form teams and throw cow dung cakes at each other during the Ugadi celebrations. The traditional custom, however, seemed dangerous amid the raging pandemic as the densely packed crowd violated all norms of social distancing during the event.

Ugadi is the first day of New Year for Karnataka, Andhra Pradesh and Telangana

Another event saw hundreds of people gathered for a three-day celebration that included processions of bulls perambulating Chowdeshwari temple in Kallur village of the same district. The celebration, meant for agricultural prosperity, also witnessed processions by dressed-up donkeys. 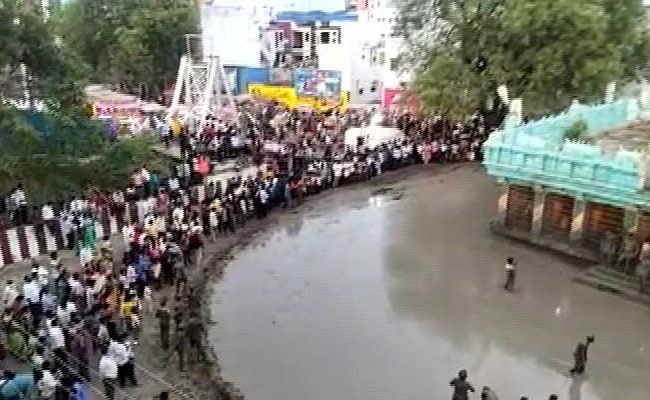 A giant wheel and several other joy rides were also seen a few metres away from the temple with a crowd of people around them, most without masks.

These events come at a time when over 5,000 COVID-19 cases have been reported in Andhra Pradesh in the last 24 hours with 626 cases from Kurnool alone - second highest in the state after Chittoor which recorded 835 cases.

Chief minister YS Jaganmohan Reddy had cancelled a pre-election public meeting in Chittoor ahead of the Tirupati Lok Sabha bypoll on April 17 due to spiraling cases in the district.

This also came on the day when the state managed to create a record on the vaccination front with 6,28,961 vaccines on Wednesday, as part of the Teeka Utsav. The Chief Minister had told the Prime Minister that the state would achieve 6 lakh vaccines during the Utsav but with vaccines in short supply, that could not happen in the first three days, but was pulled off on April 14.