Read inOther Languages
This Article is From May 17, 2020 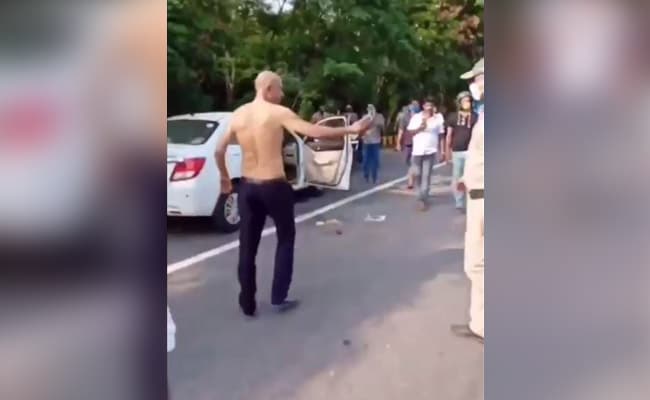 Visakhapatnam police have booked multiple cases against the doctor, who said he was being targeted

Several distressing videos emerged from Andhra Pradesh's Visakhapatnam on Saturday, in which a doctor stripped to the waist and shouted obscenities at a number of police officers, accusing them of working for Chief Minister Jagan Mohan Reddy, whom he, in turn, accused of "killing Dalits".

Towards the end of one of the videos the doctor, later identified as Dr K Sudhakar of the Area Hospital in Narsipatnam, is seen with his hands tied behind him as cops take him away in an autorickshaw. It is not known why the doctor, against whom multiple cases have been filed, was tied up.

On April 8 the same Dr Sudhakar had been suspended on charges of spreading falsehoods about the government. He had accused the state of not providing N95 face masks to medical staff treating COVID-19 patients; he also alleged doctors and nurses used the same mask for 15 days at a stretch.

The incident on Saturday was filmed in a series of videos, some of which were shot by the cops themselves, in which Dr Sudhakar, dressed in a pink shirt with a face mask hanging around his neck, is first seen shouting at cops from inside his parked car.

Other videos show the doctor throwing stuff, including what appear to be packets of food, out of his car while verbally abusing the cops and daring them to assault him.

One video shows a cop displaying his broken mobile phone, allegedly grabbed and thrown to the ground by Dr Sudhakar, as the bare-chested doctor approaches while making threatening sounds.

It is unclear when or why the doctor took off his shirt.

In yet another video the doctor, by now wearing only black trousers, is shoved by a man standing next to a uniformed police officer. Cops surrounding Dr Sudhakar shout at him, repeatedly gesturing towards his car and indicating that he get back inside.

One video also shows the doctor making communal comments and using abusive language against Chief Minister Reddy; he claimed the Chief Minister was working against Hindus and was being supported by both the cops and K Chandrashekar Rao, Chief Minister of neighbouring Telangana.

All through the videos, other police officers appear to be gesturing to the crowd that gathered, urging them to maintain social distance and stay away.

Cops can also be heard saying that they had decided not to physically restrain the doctor, whom they accused of being drunk, as he could be COVID-19 positive.

A second medical professional, Dr Sridevi, said Dr Sudhakar appeared to be mentally disturbed; he was rambling on and making allegations without any coherent argument. She indicated that Dr Sudhakar would be placed under medical observation to assess his mental condition.

Dr Sudhakar, however, suggested he was being targeted.

"I was driving towards Anakapalle when the police stopped me and asked why I was carrying so much cash. I said it was to repay a loan. They seized my cash and planted two bottles in my car. They beat me badly and have threatened to book terror cases against me," he told reporters after being taken into police custody.

Meanwhile, the opposition Telugu Desam Party (TDP) has accused Chief Minister Jagan Reddy's YSR Congress of torturing and humiliating the doctor by tying him up before taking him into custody.

Visakhapatnam Police Commissioner RK Meena has suspended one constable for "inappropriate action" during this incident.