After Telangana Chaos, Andhra, Karnataka Have Quarantine Deal For Migrants

In an effort to control the spread of the COVID-19 virus, Prime Minister Narendra Modi ordered a nationwide 21-day "total lockdown" on Tuesday 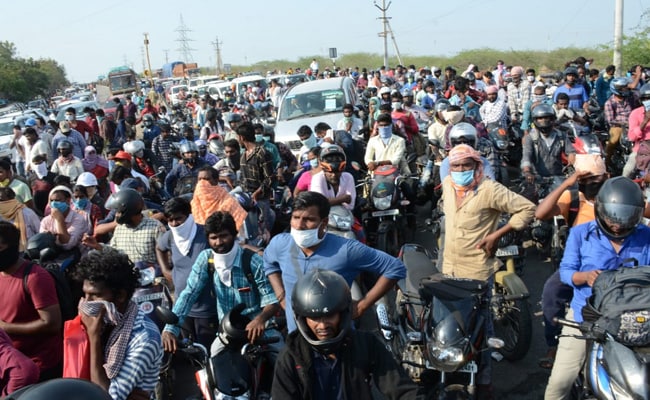 A joint quarantine operation was carried out by the Andhra Pradesh and Karnataka governments today to help 1,334 migrants from various districts of Andhra amid the 21-day nationwide lockdown to check the spread of the COVID-19 virus.

The exercise avoided the chaotic stand-off between the Andhra and Telangana administrations on Thursday, when thousands trying to enter were stranded at the border for hours. The tense situation even led to a clash between Andhra cops and those trying to come into the state.

According to Kranti Rana Tata, the Deputy-Inspector General of Anantpur Range in Andhra, the nearly 1,500 fishermen who had been at sea when the lockdown began had arrived at a checkpost in Nangili, which is in Karnataka's Kolar district and is adjacent to Andhra's Chittoor district.

They had reportedly been given permission to travel across Karnataka and into Andhra by the Deputy Director of Fisheries in Mangalore. However, they were stopped at the border by Andhra police as cross-border travel has been suspended.

Keen to defuse the situation as soon as possible the chief secretaries of the two states met. Under the terms of the operation agreed upon by them, the Karnataka government will quarantine fishermen and workers from Andhra for the duration of the lockdown.

The Andhra government will support this by providing food and water, as well as transport to an identified quarantine facility and medical care and screening for COVID-19 infection.

The COVID-19 outbreak in the country has infected over 900 people and the virus has been linked to the deaths of at least 19 people. There are 19 actives cases in Andhra and 64 in Karnataka. A further three cases have been reported from Odisha.

In an effort to control the situation, the Prime Minister ordered a complete lockdown on Tuesday, hoping to check the spread of the virus.

However the lockdown resulted in a massive exodus of migrant workers from around the country as casual labourers, who have been left without a job or money, scramble to reach home towns and villages in other states.

In distressing videos shared by news agency ANI this evening, thousands were seen massed at bus stations in Delhi waiting for a ride into neighbouring Uttar Pradesh.

Worldwide over 5 lakh people have been infected and more than 23,000 have been killed by one of the most infectious viral attacks in recent times.