Amritsar train tragedy: The tracks at Jaura Phatak were on an elevation, which gave a better view of the burning effigy of Ravan 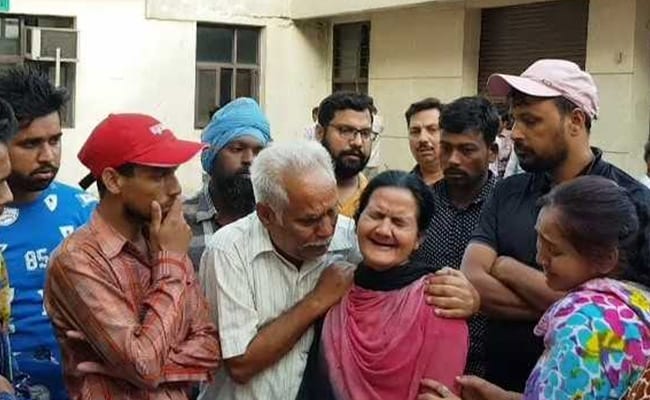 Relatives of the dead are still coming to terms with the loss.

At least 60 people celebrating Dussehra were killed after a train ran over hundreds standing on a railway track in Amritsar on Friday evening. Many among them included children and women.

The tragedy has also left an uncertain future for many families. "My child had left for the first time to celebrate Dusshera. He will never return now. We don't have any support," mother of one of the dead said.

More such horrid stories of the accident emerged as relatives of the dead gathered outside the hospital. Dalbir Singh had just finished playing Ravana at the event and and was walking towards Joda Phatak to get a better view of the fireworks, when he saw a train approaching the crowd who were standing on tracks to watch the Dussehra festivities. Before he could raise an alarm, Mr Singh was crushed under the train.

"For more than 20 years, people from adjoining villages gather at the vacant plot at Joda Phatak, barely 50 metres from railway tracks, to watch the celebrations," said Sawan Kaur, the mother of Dalbir Singh. His wife, also in her twenties, sat next to the mother with her eight-month-old cradled in her arms, tears rolling down her cheeks. "I appeal to the government to provide a job to my daughter-in law," news agency ANI quoted Sawan Kaur.

Doctors at Civil Hospital and Guru Nanak Hospital said 32 bodies have been identified. It will take time to identify more bodies as they have been cut into pieces by the metal wheels of the fast-moving train, they said.

Over 700 people watching the huge Ravana effigy going up in flames amid exploding crackers when the Jalandhar-Amritsar DMU passenger train coming to Amritsar from Hoshiarpur came hurtling down around 7 p.m.

It took just about 10-15 seconds for the train to pass -- and leave behind a heap of crushed and dismembered bodies.

People standing on the tracks did not realise that the train was approaching fast due to the noise of the firecrackers during the burning effigy.