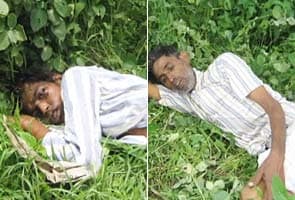 Allahabad: Dehumanised, neglected and virtually left on their own - this is the condition of two patients in Allahabad. They have been dumped by a government hospital simply because they are too poor to afford their treatment.

These two have already been abandoned by their relatives.

While 50-year-old Ram Singh was being treated for jaundice, the other patient is about 30 years of age and is suffering from epilepsy.

They have been booked for attempt to murder. Barring the doctor, the others have been arrested.

According to police, following Dr Sharma's instructions, the ward boys and the ambulance driver dumped the two patients on Tuesday.

"After the matter was brought to our notice, we got the patients re-admitted in the hospital. The hospital employees had dumped the two men on the outskirts of Jhunsi town," Additional Superintendent of Police Jai Prakash told reporters.

Hospital chief SP Singh told reporters, "An inquiry has been initiated into the matter. Strict action will be taken against all those involved in the inhumane act."

Promoted
Listen to the latest songs, only on JioSaavn.com
(With IANS inputs)