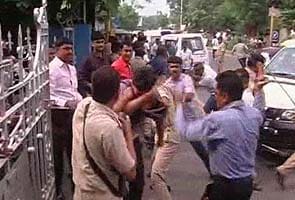 Members of the VHP seen clashing with policemen in Ahmedabad

Ahmedabad: In what has resulted in a confrontation between the Vishwa Hindu Parishad (VHP) and the Narendra Modi administration in Gujarat, the Ahmedabad police on Tuesday carried out a mild lathicharge on a group of VHP workers who were protesting against the arrest of six of their men in connection with the vandalism at an India-Pakistan painting exhibition last week.

Agitated VHP workers assembled at the Police Commissioner's office in Shahibaug late in the evening, protesting against the midnight arrest of some of their workers.

In order to disperse the crowd, police resorted to a mild lathicharge. The VHP claimed that some of its members received injuries.

The police had arrested six VHP workers, including VHP city joint secretary Jwalit Mehta, after the organiser of an India-Pakistan exhibition had filed an FIR at the Gujarat University Police Station on Monday.

Pravin Togadia, the international general secretary of the VHP, and a critic of the Modi government, tweeted about the arrest and even tagged his post to BJP president Rajnath Singh, claiming that his workers were arrested by the police for votes. Mr Togadia alleged that this was a political move.

Promoted
Listen to the latest songs, only on JioSaavn.com
"Opposing Pak artists exhibition in Ahmedabad when Pak killing our army: a crime? Bajrang Dal, VHP workers picked up by police for votes!" Mr Togadia tweeted.