The horrifying attack took place at around 1pm with many pedestrians around the area and vehicles rushing past. 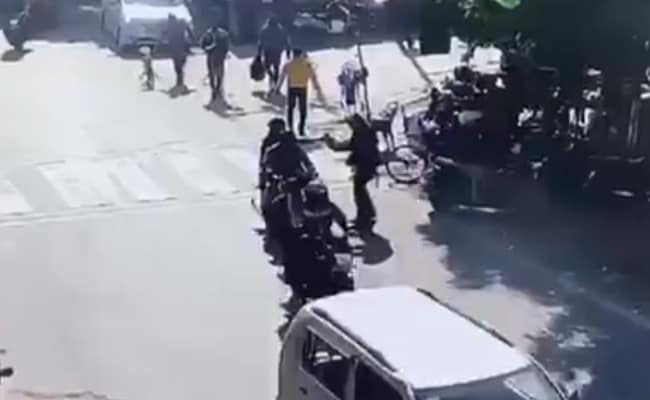 Harish Pachauri, a 50-year-old property dealer, died on the way to a hospital

Two men on a motorcycle stop in front of a man on a busy road and shoot him thrice at point blank range on Saturday, dramatic visuals from Uttar Pradesh's Agra show.

Harish Pachauri, a 50-year-old property dealer, died on the way to a hospital.

CCTV footage from the area shows the victim waiting by a pedestrian crossing on a busy intersection and speaking on his mobile phone when a motorcycle slows down in front of him. The pillion rider shot the victim who fell to the ground pulling down the shooter off the bike as well. The unidentified assailant then got up and shot the victim again before getting on the bike and escaping.

A property dealer's murder on a busy Agra intersection , caught on cctv . Amazing impunity . 24 hours after the incident ,still awaiting word from @agrapolice on arrests ... pic.twitter.com/k9ah4ChKMv

The horrifying attack took place at around 1pm on Saturday with many pedestrians around the area and vehicles rushing past. The Agra police is yet to make arrests in the case but say are enquiring about the victim's enemies from his family.

"We are speaking to his family whether he had any enmities with anyone," Agra Superintendent of Police Babloo Kumar told reporters.

5 Burnt To Death As Car Catches Fire After Collision With Truck: Police