How Technology Helped A Young Japanese Man With A Genetic Disease

Yunik Shin, now 21, studies Western Philosophy at Tokyo University, one of Japan's best universities, and lives on his own in an apartment near the campus. 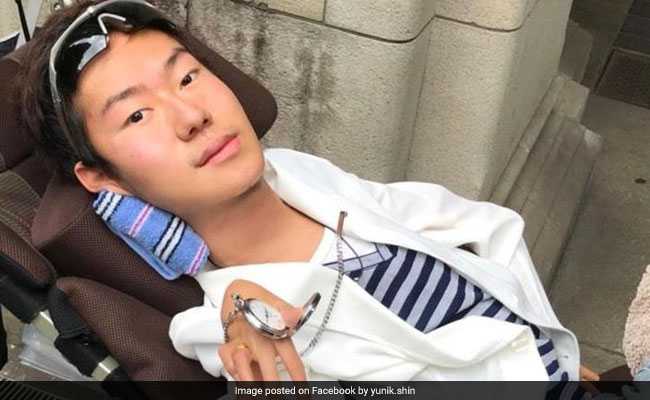 Since elementary school, Yunik Shin studied with the help of technology.

Yunik Shin was born with spinal muscular atrophy (SMA), requiring assistance for his daily life. Hoping he'd be able to learn as much as possible on his own, his parents gave him a personal computer when he was just three years old.

Shin, now 21, studies Western Philosophy at Tokyo University, one of Japan's best universities, and lives on his own in an apartment near the campus.

"People everywhere are forging their own way in life, overcoming challenges to achieve their goals. For some of us technology is at the heart of this journey," Shin said.

Shin's journey hasn't been an easy one, but thanks to his parents lobbying a local education board - which once suggested Shin go to a special needs school - he has always been studying at regular schools.

Since elementary school, he studied with the help of computer software, such as Microsoft Word and OneNote. He uses a small, special mouse to draw graphs.

"By using Windows' on-screen keyboard and moving the mouse, I can use my PC for study and communicating with my friends," he explained.

Since 2013, Microsoft has assisted his learning, including preparation for the tough university entrance exam, by providing IT tools, such as the on-screen keyboard and a cursor control system that uses eye movements.

"I have faced lots of challenges like everyone else, but we often need help too," Shin said. "I'm currently trialing the new eye tracking software that enables me to move the mouse cursor with my eyes. This is one more example of how technology will help people like me work more efficiently."

"My dream is that one day these kinds of functions will not be listed under accessibility but will be an integral part of how we all work to make a better future," he added.

In 2016, Shin successfully passed the entrance exam for Tokyo University after spending a year at a preparatory school together with other students who aimed to enter the country's competitive universities.

Now as a university student, Shin continues to study on his electric stretcher with assistance and support from helpers and the school. Since April this year, he lives on his own with assistance when he needs to move.

The entrance exam for Tokyo University is one of Japan's most competitive assessments. Before the exams, Shin submitted a request to the exam authority, the National Center for University Entrance Examinations, notifying them that his physical condition required more attention.

During the exam, Shin sat in a separate room with more time to take the paper, and was assigned an assistant to write down his answers. Shin was also allowed to use a computer, especially when an answer required a graph.

Shin's favorite quote by Friedrich Nietzsche, the philosopher he admires, is "Man is something that shall be overcome." The feisty student is often led by these words when reflecting his own physical disability.

"I believe that we need a new inclusive philosophical framework because technology is now empowering people to become independent beyond any physical barriers," he says.

Learning from those with disabilities to improve their opportunities

One of those working with people with disabilities, such as Shin, is Microsoft Japan employee Tomoko Ohshima.

Gathering their comments, requests and feedback, she passes those to the tech giant's developers to create tools to help people with disabilities.

Ohshima was encouraged to take on this project by Microsoft Japan some ten years ago, inspired by her interactions with a colleague, a programmer who is blind. "Technology is so helpful for people!" she says.

Meanwhile, Japan's entrance exam system is also improving to accommodate students with various disabilities. A consensus has been established to allow students with disabilities to use tools approved by the authorities, such as computers, and to extend the test time depending on each student's condition. Ohshima's commitment of the last ten years coincides with this improvement, and has allowed her to witness the transition.

Challenges still remain for students with disabilities. For example, having a computer read out exam questions is rarely permitted in Japan. Instead, a reader is assigned to read the questions aloud for the examinee. This does not always work well for the students -- some students might want to read important parts more slowly, and others might want to have questions read out repeatedly to better understand them.

One of the reasons computer reading has not been approved is because examiners need to create extra exam papers by digitalizing them. This may be avoidable with optical character recognition (OCR).

"We are willing to provide any useful help and technology to create a society in which anyone can have the opportunity to take the entrance exams and be judged fairly regardless of one's physical condition," says Ohshima.

About 200 Pilot Whales Die After Being Stranded On Australia Beach