It's also not the first time sex and copulation have come up in relation to Football World Cup 2018. 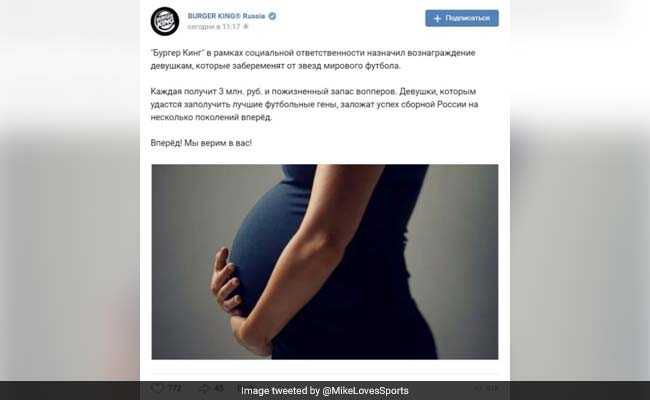 A Burger King ad was posted with a woman holding her baby bump.

You could wear a festive jersey. You could take a day off to watch some games. You could paint your face or even fly to Russia to attend in person.

Or, according to a new ad from Burger King, you could allow yourself to get impregnated by a World Cup soccer star.

In a social media post, Burger King's Russia team offered 3 million rubles (about $47,000) and a lifetime supply of Whoppers to "women who get pregnant from world football stars." It's all part of an effort, it said, to inherit "the best football genes."

The ad was posted with a woman holding her baby bump.

"Burger King, within the framework of social responsibility, has appointed a reward for girls who get pregnant from the stars of world football," the ad reads in part, according to a Deadspin translation. "Each will receive 3 million rubles and a lifelong supply of Whoppers. For these girls, it will be possible to get the best football genes, and will lay down the success of the Russian national team on several generations ahead. Forward! We believe in you!"

The ad was posted Tuesday morning. It was deleted Tuesday night after a scathing social media reaction. In a statement, Burger King apologized for the ad.

"We are sorry about the clearly offensive promotion that the team in Russia launched online," they wrote. "As soon as it was brought to our attention, we had it removed. It certainly does not reflect our brand or our values and we are taking steps to ensure this type of activity does not happen again."

On social media, the company's Russian division explained that it pulled the ad because "it turned out to be too insulting."

Remarkably, this isn't the first time Burger King's Russia team has been charged with producing a sexist ad. Last year, the company mocked a young woman who was allegedly raped at a party.

In response to an interviewer's question about how much she had to drink, the 17-year-old held up two fingers, indicating just a little bit. That gesture became something of a meme. In an ad, Burger King illustrated the victim's likeness, complete with her fingers, on a promotion about a sale with only a little bit of time left.

Promoted
Listen to the latest songs, only on JioSaavn.com
It's also not the first time sex and copulation have come up in relation to this World Cup. Last week, a Russian lawmaker suggested that Russians abstain from sex with foreign fans in order to avoid "unhappy" mixed-race babies.