China also backed India's move in the UN to make June 21 as International Yoga Day, giving a fillip to hundreds of yoga clubs and organisations. 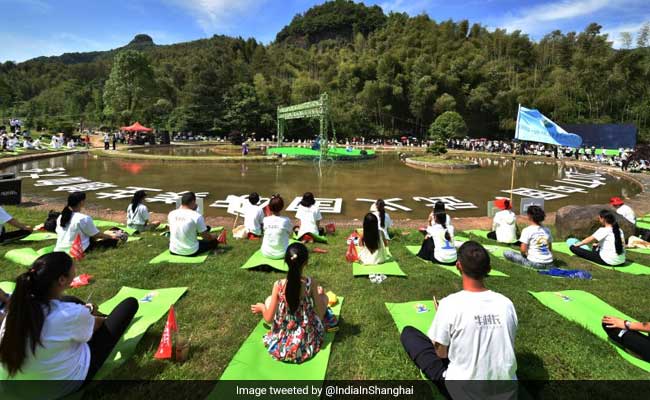 Yoga now has become a trend with people practicing in parks.

Beijing: Yoga fever has gripped China ahead of the third UN International Day of Yoga as thousands of Chinese would participate in scores of events organised across the country which officials say will make it the second biggest celebrations of the day in the world after India.

Beijing's iconic Great Wall as well as numerous parks, lakes and resorts across China have become venues for the both official and unofficial yoga events being held with active support of Chinese government bodies.

Though yoga has become immensely popular over the years in China vying with ancient indigenous physical fitness martial art form Tai Chi, it got an official sanction when Chinese Premier Li Keqiang joined Prime Minister Narendra Modi in Beijing in 2015 at a joint event during the latter's visit.

China also backed India's move in the UN to make June 21 as International Yoga Day, giving a fillip to hundreds of yoga clubs and organisations.

A first yoga college has come up outside India with joint collaboration of India and China in Yunnan Minzu (Nationalities) University in Kunming, which has also lined up several yoga events.

Yoga now has become a trend with people practicing in parks.

Promoted
Listen to the latest songs, only on JioSaavn.com
The Indian Embassy here which has a yoga specialist Umesh Babu besides Indian Consulates in Shanghai and Guangzhou are organising dozens of events commemorating the events featuring Chinese officials.