Yemen President wounded in rocket strike at his palace 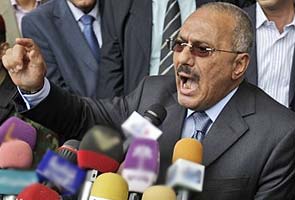 Sanaa: Yemeni President Ali Abdullah Saleh was wounded when opposition tribesmen determined to topple him hammered his palace with rockets on Friday in a major escalation of nearly two weeks of fighting with government forces. At least four guards were killed and seven top officials were also wounded, an official said.

The official said Saleh suffered light injuries to the neck and was treated in the palace. Yemeni state TV quickly aired a statement that Saleh was "in good health," denying a claim on an opposition TV station that the president was killed in the strike.

It was the first time that tribal fighters have directly targeted Saleh's palace in the fighting that has rocked the capital since May 23. The rocket strike came after government forces launched an intense artillery barrage at the homes of two tribal leaders and a top military general who also joined the opposition. The houses were flattened, witnesses said.

The fighting pits Saleh's troops against tribesmen loyal to Sheik Sadeq al-Ahmar, head of the Hashid, Yemen's most powerful tribal confederation. Al-Ahmar supports the hundreds of thousands of protesters who have been pressing for Saleh's ouster since February, but his tribal fighters stayed on the sidelines until Saleh's troops last week moved against al-Ahmar's residence in Sanaa.

The rockets on Friday hit the presidential compound as officials were praying at a mosque inside, the official said, speaking on condition of anonymity because of the sensitivity of the situation. Four guards were killed and seven other officials wounded, he said.

Saleh, in power for 33 years, has stuck out for months against the wave of peaceful protests that spread across Yemen since February. Tens of thousands of demonstrators continue to mass daily in a central square of Sanaa, as well as in other cities. On Thursday night, government forces opened fire on protesters in Sanaa, wounding three, and troops also fired on protesters in the city of Taiz, south of the capital, on Friday.

But the fighting in Sanaa has turned the conflict into an all-out battle for power between two families, the al-Ahmar and Saleh's. The president has for years planted his close relatives in command of security forces and in top government positions. In days of fighting, tribesmen have overrun more than a dozen ministries and government buildings, and government artillery has pounded Sanaa's Hassaba district where Sadeq al-Ahmar's residence is located.

On Friday, troops expanded their shelling to the southern side of the capital, pounding the homes of two of al-Ahmar's brothers, Hameed and Himyar. They also targeted the home of Gen. Ali Mohsen al-Ahmar, the commander of the powerful 1st Armored Division who has also joined the opposition but has so far stayed out of the battle. He is not related to Sadeq al-Ahmar. The houses were destroyed, witnesses said.

Troops attacked and burned the headquarters of a private TV station owned by one of the 10 al-Ahmar brothers. A building housing an airline office also was set alight.

Despite the gunfire and shelling, protesters swarmed into a Sanaa main street for Friday prayers and funeral processions. The cleric delivering the prayer sermon said Saleh was trying to turn the popular uprising into a personal conflict.

The president "wants to overturn this revolution and show the world that it is a conflict between al-Ahmar and Saleh," Imam Taha al-Mutawakil told the crowd.

Promoted
Listen to the latest songs, only on JioSaavn.com
A young man speaking to the crowd said the Friday gathering also aimed to show support for protesters in Taiz, which has seen a fierce crackdown the past week. "By declaring war on the Yemeni people, Saleh's regime is committing suicide," the man said in a microphone.

The protesters distributed leaflets in the crowd, giving them instructions on how to deal with the recurrent shelling, particularly in the middle of the night. "Keep your cool. Keep the windows open, shut off the gas and water, go to the basement."
Comments
YemenYemen protestYemen Prime Minister