China also wants the sanctions relaxed and Xi Jinping said he hopes that North Korea and the United States will meet each other "halfway". 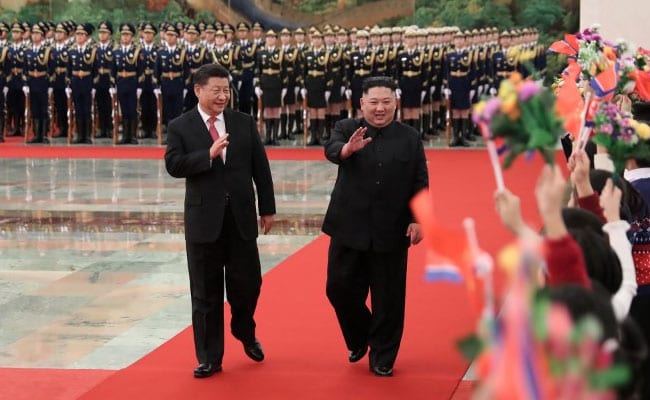 Kim visited Beijing by train this week for two days of talks that reasserted China's role in the process, and were seen as a strategy session ahead of a second summit between the North Korean leader and US President Donald Trump.

At their first meeting in Singapore in June, Kim and Trump signed a vaguely worded document with Kim pledging to work towards the "denuclearisation of the Korean peninsula".

But progress has since stalled with Pyongyang and Washington -- which stations 28,500 troops in South Korea -- disagreeing over what that means.

North Korea wants relief from the multiple sets of sanctions imposed on it over its nuclear weapons and ballistic missile programmes, while the US wants the measures to remain in place until it gives up its arms -- something Pyongyang has made no public promise to do.

China also wants the sanctions relaxed and Xi said he "hopes that the DPRK and the United States will meet each other halfway" according to China's state news agency Xinhua, using the initials of the North's official name.

Xi "spoke highly of the positive measures taken by the DPRK side", it added.

North Korea has carried out six nuclear blasts and launched missiles capable of reaching the whole of the United States, but has carried out no such tests for more than a year, and blew up the entrances to a nuclear testing ground it said it no longer needed.

Pyongyang has rejected demands for what it calls its "unilateral" disarmament as "gangster-like".

China is the North's sole major ally and key trade partner but relations had deteriorated over Pyongyang's nuclear activities, before warming up last year, with Kim meeting Xi three times.

Kim "raised concern" about the impasse in talks with the US, according to Pyongyang's official KCNA news agency, which said the Chinese leader had issued a ringing endorsement of the North's position.

"Xi Jinping said that the legitimate issues raised by the DPRK are rightful demands and that he fully agrees that the DPRK's reasonable interests should be justly resolved," it said.

Each of the previous Kim-Xi meetings have come shortly before or after the North Korean's summits with either Trump or South Korean President Moon Jae-in.

Trump said Sunday the US and North Korea were negotiating the location of their next summit, a meeting Moon said Thursday was "imminent".

Pyongyang needed to take "bold, practical measures for denuclearisation" to ensure sanctions are lifted, he told reporters, but added that "corresponding measures" were also needed from the US, such as agreeing a "peace regime" and formally declaring an end to the 1950-53 Korean War.

Moon acknowledged the Singapore agreement was "somewhat vague", and there was "scepticism" over Kim's denuclearisation pledge.

But Kim had assured him and other leaders that his view of denuclearisation was "no different in any way from what the international community demands", Moon said, and Pyongyang would not link it to the presence of US forces in the South or nearby.

Washington and Beijing have competing strategic interests in northeast Asia, and Xinhua said Xi had re-asserted China's importance in the diplomatic process.

Xi greeted Kim at Beijing's ornate Great Hall of the People on Tuesday -- believed to be the North Korean leader's birthday -- before hosting a welcome banquet for Kim and his wife Ri Sol Ju.

The visit coincided with trade talks between Chinese and US officials. Analysts say China could use the North Korean issue as a bargaining chip in the negotiations, but Beijing's foreign ministry rejected any link between Kim's trip and the talks.

There was a "rare historic opportunity" for a political settlement on the peninsula, Xi said according to Xinhua, and China "supports the DPRK and the United States holding summits and achieving results".

(Except for the headline, this story has not been edited by NDTV staff and is published from a syndicated feed.)
Comments
ChinaNorth KoreaNorth Korea denuclearisation