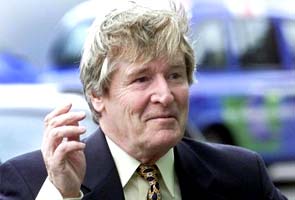 Roache, 81, has played lothario Ken Barlow in the series portraying life in a fictional northern English town since its first episode on December 9, 1960.

He was arrested at his home in northwest England over an allegation of raping an under-age girl between April and July 1967.

"An 81-year-old man from Wilmslow in Cheshire has this morning, Wednesday May 1, 2013, been arrested by Lancashire Constabulary on suspicion of rape," a Lancashire Police spokesman said.

He said the man would be interviewed during the course of the day.

Broadcaster ITV, which makes Coronation Street, said it was not in a position to comment but reports said Roache would not appear in the soap while investigations continue.

Roache issued an apology in March after appearing to suggest that sex abuse victims were being punished for past sins, and calling for anonymity for those accused of child sex offences.

In another interview last year Roache claimed to have slept with 1,000 women.

Guinness World Records lists "Coronation Street" as the world's longest-running soap opera following the cancellation in September 2010 of the US show "As the World Turns", which ran from 1956 on CBS.

It also lists Roache as the longest-serving soap actor.

Promoted
Listen to the latest songs, only on JioSaavn.com
Veteran Australian-born entertainer Rolf Harris has been named by the British media as another of the men interviewed as part of the investigation, although police have never named him.