Someone Hurt? "Combat" Pillow Fighting Gets Its First Official Champion

World's First Pillow Fighting Championship: The event saw 16 men and eight women, most of them trained in mixed martial arts, landing pillows on their opponents instead of punches and kicks. 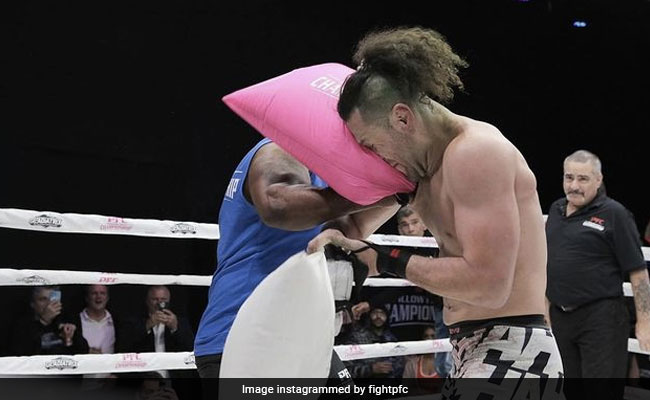 As children, we have regularly done it. As adults, not that often. But that did not stop pillow-fighting to come of age. A pillow-fighting tournament was recently organised in Florida, US. And the Pillow Fight Championship crowned its first-ever champion after the children's game was turned into a combat sport with professionals taking part in it. The pay-per-view event saw 16 men and eight women, most of them trained in mixed martial arts, landing pillows randomly on their opponents instead of punches and kicks inside a ring. Nobody gets hurt. While it does sound cushy, the sport is anything but that.

Participants in the pay-per-view appeared as serious as those in any other combat sport to win the title. The winning prize comprised a title belt and $5,000 (roughly Rs 3.73 lakhs).

Brazil's Istela Nunes won the coveted title on the women's side by defeating American Kendahl Voelker. In the men's category, Hauley Tillman from the US defeated countryman Marcus Brimage.

People behind the Pillow Fight Championship say it began with an idea to develop a real fighting sport that would appeal to the international family audience. It soon turned into pure entertainment and fun that children can watch on TV. The championship offers all the thrills of a hand-to-hand combat fight without any blood and a lot more action, sometimes even funny. There are three, two-minute rounds in each fight.

Steve Williams, CEO, said on the PFC website that the fighters do not like to get hurt, and many people do not want to see blood. They want healthy competition, but not at the expense of violence.

The initial success of the championship has likely opened the way for more such events to be organised in the near future. Even PFC may hold more tournaments over the coming months. With so many people growing up fighting with a pillow with their siblings, friends and family members, the sport is already very relatable and likely to grow rapidly.