4 Million Recorded Covid Deaths An Underestimate Of Overall Count: WHO

Coronavirus: Millions are facing new lockdowns across Asia and Indonesia has emerged as a global hotspot with death rates rising tenfold in a month to a record 1,040 on Wednesday. 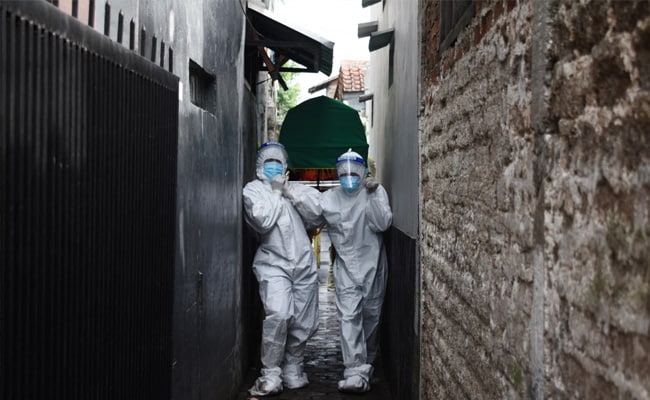 Coronavirus: Indonesia has become a global hotspot with record 1,040 deaths reported on Wednesday.

More than four million people have now died from Covid-19, the WHO said on Wednesday, as many rich nations prepare to loosen restrictions even as countries in Asia battle surging infections.

Millions are facing new lockdowns across Asia and Indonesia has emerged as a global hotspot with death rates rising tenfold in a month to a record 1,040 on Wednesday.

"The world is at a perilous point in this pandemic," said WHO chief Tedros Adhanom Ghebreyesus, calling the four million figure an underestimate of the true toll.

Tedros castigated rich countries for hoarding vaccines and protective equipment and accused them of acting "as though the pandemic is already over" by relaxing restrictions.

Indonesia -- a vast archipelago of 270 million -- has ordered people to work from home if possible and restricted opening hours of business across its territory.

"I'm very scared about getting infected," said Nesan Nusmana, who lives near a cemetery on Java where ambulances were queuing to deliver the dead.

Sydney's five million residents, already two weeks into a lockdown, will be staying at home for another week after 27 new cases were detected.

"It's still scary that the virus is out there," said Menno De Moel, 44, at a vaccination centre in Sydney where he was getting his first shot.

"Hopefully this is going to be the last lockdown, but on the other hand anything that is needed, needs to be done."

More than 18 months since the virus emerged in China, the world is still struggling to move on.

This is particularly true of the sporting world, where many events continue to be played with no spectators, postponed or cancelled altogether.

Preparations for the Tokyo Olympics, which was pushed back from last year, have been plagued by the virus.

Just 16 days before the Games are due to kick off, officials scrapped the torch relay to stop crowds from gathering and are expected to announce that a state of emergency in place in Tokyo will continue during the Games.

Local reports suggested this would force the event to be held behind closed doors.

By contrast, England and Denmark will contest football's Euro 2020 semi-final on Wednesday in front of tens of thousands of fans.

Britain is facing a surge in cases, but mass vaccinations have helped to keep hospital admissions and deaths comparatively low.

The government has ordered an end to almost all restrictions in England over the coming weeks.

But the World Health Organization warned that transmission of the virus would increase regardless of high vaccination rates.

"I would urge extreme caution in the complete lifting of public health and social measures at this time because there are consequences for that," said WHO emergencies director Michael Ryan when asked about England's plans.

As richer countries peel back their rules and regulations, many of the current outbreaks are hitting poorer nations.

The WHO's Tedros renewed his plea for richer nations to share their resources.

"From a moral, epidemiological or economic point of view, now is the time for the world to come together to tackle this pandemic collectively," he said.

But in the rich world, people are more focused on getting back to normality, with a tentative return of mass tourism.

However, illustrating the difficulties of a mixed approach to virus measures, one group of US teenagers in the United States caused outrage when they refused to wear masks on a flight to the Bahamas.

"It was bad. First, they were yelling. They were cursing," witness Malik Banks told North Carolina station WSOC-TV.

"They were being very obnoxious."