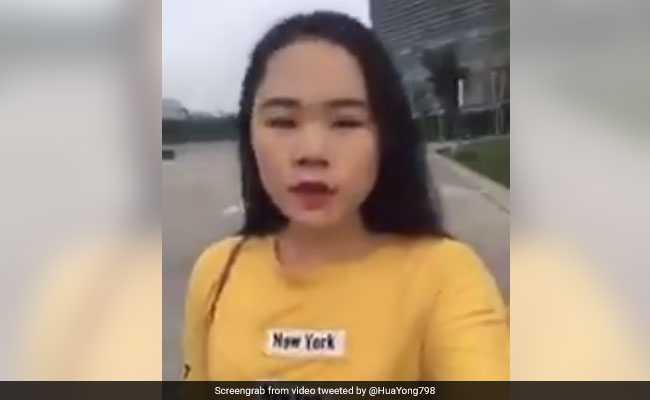 A woman who live-streamed herself throwing ink onto a picture of Chinese President Xi Jinping has been detained, according to activists who accuse authorities of suppressing speech to protect a "cult of personality" around the country's leader.

The US-based Chinese Human Rights Defenders (CHRD) activist network said authorities have also taken the woman's father and a Chinese artist into custody after they sought to publicise her plight on social media.

The woman, who has been identified by activists as 28-year-old Dong Yaoqiong, went live on Twitter on July 4 in a video in which she accused the ruling Communist Party of employing "oppressive brain control".

In the video, retweeted tens of thousands of times, Dong splashes ink on a poster bearing Xi's image at a location in Shanghai's financial district, saying defiantly: "Xi Jinping, I'm right here waiting for you to arrest me."

CHRD said Ms Dong is believed to have been arrested later that day and that her Twitter account was deleted hours after the incident.

Her final tweet included a photo of several uniformed men outside her apartment.

Chinese authorities swiftly punish those who deface leaders' images and other Communist symbols.

Ms Dong's act comes at a particularly sensitive time as the government aggressively nurtures a cult of personality around Xi, especially since he dramatically strengthened his hold on power during a Communist Party congress late last year.

AFP has been unable to verify the woman's identity, but a man claiming to be her father Dong Jianbiao at one point confirmed it by posting her government-issued ID.

A statement attributed to the father that circulated on Twitter called his daughter's detention an "act of kidnapping like bandits, an act of the law enforcement breaking the law".

He and the artist Hua Yong both have since disappeared in the last few days after calling on social media for the woman's release, activists said.

Ms Hua was previously detained in 2017 after documenting the mass eviction of migrants in Beijing.

Shanghai police denied knowledge of the case when contacted by AFP.

(Except for the headline, this story has not been edited by NDTV staff and is published from a syndicated feed.)
Comments
Dong Yaoqiong DetainedThrowing Ink On Xi Jinping PosterXi Jinping