Woman Barred From Taking American Airlines Flight Unless She 'Covered Up'

American Airlines spokeswoman Shannon Gilson said the company has fully refunded the passenger for the flight, but Tisha Rowe, she hasn't received any notification of a refund. 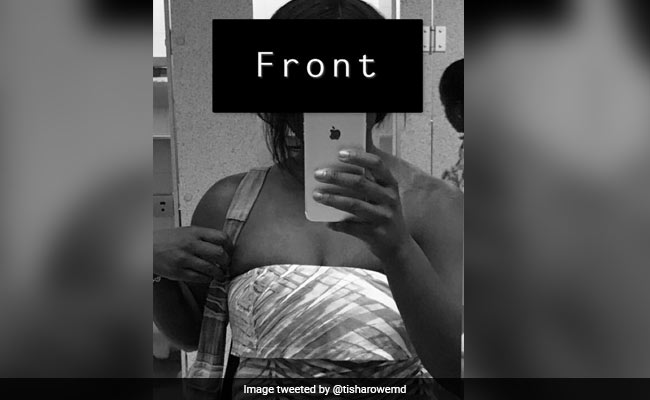 A Houston woman and her 8-year-old son were barred from boarding an American Airlines flight on June 30 unless she "covered up" with a blanket.

American Airlines spokeswoman Shannon Gilson said the company has fully refunded the passenger for the flight, but Tisha Rowe, a family medicine physician who was flying from Jamaica to Miami, told The Washington Post on Tuesday that she hasn't received any notification of a refund or any money sent to her account.

Rowe and her son were returning to the United States after spending a week in Jamaica, where her family is from. When she arrived at the Kingston airport, she recalls, she was sweating and stepped inside a bathroom to cool off before boarding.

"I looked at myself," she said. "I knew how I looked, front and back." She was wearing a romper with a tropical print.

Rowe then boarded the plane with her son, but a female flight attendant asked her to step outside to talk.

"Do you have a jacket?" Rowe recalled the flight attendant asking, to which she responded no. "You cannot get on the plane dressed like that."

Rowe said she finally yielded because she didn't want to risk her flight and asked the attendant for a blanket. She said the attendant continued to repeat that she couldn't get on the plane without covering up.

She and her son finally walked back to their seats. Her son then covered his face with the blanket. When Rowe peeked under it, she saw that he was crying.

" 'Mommy, follow the rules,'" he told her, according to Rowe's account. "I'm trying to explain to an 8-year-old - Mommy did not break the rules."

Rowe spent the rest of the flight feeling nauseated. When the flight landed, she said, she encountered another female passenger who was wearing shorts that were shorter than hers but who apparently faced no issue boarding the plane. Rowe told her what happened, and that woman gave Rowe her name and phone number, agreeing to back her up in a formal complaint.

"The difference between that woman and me is she was about a size 2, thin," Rowe said. "It's hard to understand if you are not a double minority, a woman and a black, how it's not pulling a card."
Gilson said the airline reached out to Rowe after hearing about her experience.

"We apologize to Dr. Rowe and her son for their experience," she said. "We are proud to serve customers of all backgrounds and are committed to providing a positive, safe travel experience for everyone who flies with us."

Rowe said that the airline has called her repeatedly but that she has made it clear that she wants to discuss the incident only in writing, via email. She said she doesn't want to relive the experience with the company over the phone.

Rowe's attorney, Geoffrey Berg of the Houston law firm Berg Plummer Johnson & Raval, said an American Airlines representative told him that the carrier does not want to be portrayed "in this way."

"In the face of a sexist, racist attack on one of their passengers, this is the corporate version of thoughts and prayers," Berg said. "The best way to not be portrayed this way is to not behave this way."

"If they expect passengers flying around the Caribbean in June in snowsuits, they probably ought to put that in the contract of carriage," Berg said.

In October 2017, the NAACP issued a travel advisory warning black passengers to avoid American Airlines flights, saying they might be subject to "disrespectful, discriminatory or unsafe conditions." The warning was lifted about a year later, with the NAACP saying in a news release that it had worked with the airline to implement implicit-bias training and a new process for resolving discrimination complaints.

But Rowe said American Airlines hasn't informed her of how to go about filing a complaint, though she has asked for any information and correspondence to be in writing. She said an appropriate response by the airline would be to acknowledge the negative effect of the dress code on passengers and make changes to it. And, she added, a refund isn't enough to erase the memory of that incident for her young son.

"If you really want to make it right, you have to realize this was traumatic for both of us," Rowe said.

It's not the first incident of its kind involving American Airlines. In April 2018, a woman named Amber Phillips was confronted by a passenger on an American Airlines flight from Raleigh-Durham, North Carolina, to Washington. A flight attendant asked her to get off the shuttle and then called police.

"Corporations like American Airlines are clearly being led by their greed of stuffing passengers onto planes," Phillips said at the time. "Mixed in with the climate that we're in in this country, mixed in with the biases that people have around black folks, around fat black folks, around fat people in general, that they are allowed to use that bias to then make it seem as though they have some entitlement to space."