With Refugees, German Muslim Minority Could be Europe's Largest 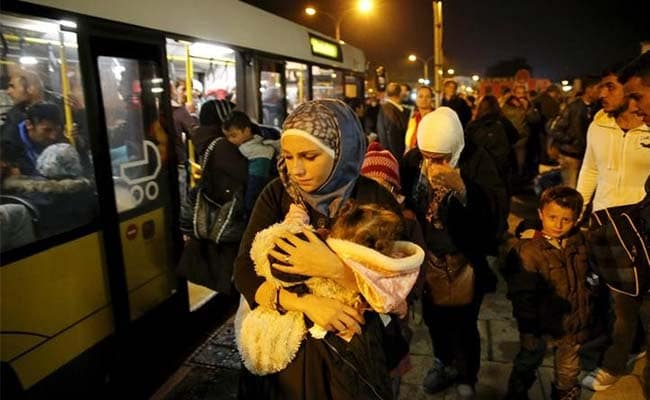 Migrants board buses to be transported to a Berlin refugee camp. (Reuters)

Berlin: When the flood of Middle Eastern refugees arriving in Europe finally ebbs and asylum-seekers settle down in their new homes, Germany could unexpectedly find itself housing the continent's largest Muslim minority.

The arrival of so many Syrians fleeing their country's brutal civil war is bound to change the face of Islam in Germany, which until now has been dominated by the Turks who first came as so-called "guest workers" in the 1960s.

While refugees from Afghanistan, Iraq and other Muslim countries are also arriving, the Syrians make up the largest single contingent - estimated at about 45 percent - and have the best chances of being granted political asylum here.

The longer-term impact on Germany, which unlike Britain or France has no tradition of taking in immigrants from former colonies, is unclear. Many are still struggling through problems all refugees face such as learning the language and getting a job. The number of those yet to follow them is also unknown.

Some trends are emerging, though, and Germans familiar with the Muslim minority see reasons for both hope and concern. The first change is simply in the numbers.

France now has Europe's largest Muslim minority with five million, followed by Germany with about four million. But the French figure is an estimate several experts say is too high.

In addition, most are young adult men, so the numbers will rise further when those who settle here start families.

WHAT KIND OF ISLAM?

Merkel's critics have raised security concerns about letting in so many unchecked refugees, but German security officials say they have not found any proof that jihadists are among them.

A broader question is what kind of Muslims will be joining a minority dominated by the local Turkish community, which makes up two-thirds of the German Muslim population.

Many Turkish immigrants were poor workers from rural areas who struggled to integrate into German society. Turkey has reinforced the diaspora's link to their homeland by building mosques and sending imams, many of whom speak no German.

"This is because of the religious composition of the country," she said in an interview. "There are many different Christians, Druze, Alewites and some Shi'ites. Religion was never in the foreground. They're very tolerant."

Being accustomed to life in a multi-faith society, Syrians could integrate more easily into German society, Kaddor said. Syria also has no religious institution like Turkey's well-funded Diyanet that oversees many Turkish mosques in Germany.

While individual Syrians may integrate more easily, their collective presence could further splinter a Muslim minority that already is unable to speak in public as a group.

Arabs are a tiny minority among German Muslims now but their total could rise to about one-fifth of the overall community, a change that could exacerbate rivalries among Muslim leaders.

A lively speaker in fluent German, Mazyek has already irritated some Turkish German leaders by outshining them in public and appearing as an unofficial spokesman for Muslims here. Rivalries like this have stymied efforts to get Germany's four main Muslim associations to work together.

"Let's face it - Arabs have a superiority complex," said a German analyst who asked not to be named. "They think they know Islam better because they can read the Koran in their language."

Birol Ucan, spokesman for the large Omar Ibn Al-Khattab mosque in the Berlin's multicultural Kreuzberg district, said some Syrians had turned up at his and other mostly Arabic-speaking mosques in recent months, but not that many yet.

"They're still busy with refugee problems like finding shelter and getting their papers in order," he said.

In general, the Syrians are better educated than other migrants coming here and have better prospects of integrating. "Syrians have a reputation for being hard workers," Ucan said.

"They're not classic guest workers," Kaddor observed. "They're middle class, even upper class - they're always the first who can flee." The most urgent task now, she said, is to provide them with German lessons and jobs so they can start a new life rather than languish in refugee shelters.

Ahmad al-Kurdi, a 26-year-old sports instructor from Hama, lives up to the image Syrians have here. In the 10 months since he arrived, he has learned German well and will soon begin studying at a Berlin university for a masters degree.

"Life here is super," he said in the flat he shares with another refugee. "But I want to go back - Syria is my country," he added, without knowing when that might be possible.

How Germany will accept the changing face of Islam on its soil is also unclear.

Volk said the current public welcome for the refugees could morph into a more divisive debate about Merkel's policies next year when four federal states hold elections.

Last winter, before it took the moral high ground in the refugee crisis, Germany saw a wave of anti-Muslim rallies led by a right-wing movement called PEGIDA, an acronym for Patriotic Europeans Against the Islamisation of the West. Merkel condemned that movement as racists "with hatred in their hearts".

Recalling that anti-immigrant parties won seats in several state legislatures in the 1990s after an earlier refugee wave, Volk said Merkel's CDU had to start a broad public debate to counter prejudices against the Muslims.

"We must be careful. The populists could make (the refugees) into their issue," he said
© Thomson Reuters 2015
Comments
germanymigrant crisisrefugees in europecivil warMuslims minoritiesPEGIDAPatriotic Europeans Against